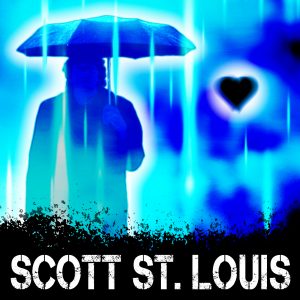 Long Beach, CA native. Singer/songwriter. Musician. Lyricist. Producer. Guitarist. Pianist. Bassist. Drummer. Musical veteran, Scott St. Louis has made a living for many years, writing and performing music for others. In the process he’s worked with countless talents that have ranged from Sublime to Bad Religion, and many, many others.

Despite a wildly successful career making music, which included touring globally (USA, London, Scotland, Berlin, China, Japan, and more), writing songs for television (CBS and FOX), as well as being heralded as one of the industry’s top songwriters, Scott eventually found himself wandering to one unavoidable conclusion:  It was time to make music for himself.  It was time to make his own music. 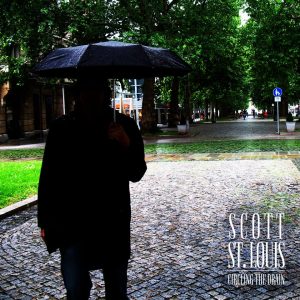 Opening with Today, a straight-up, rock’n’roll anthem dedicated to moving forward and moving on. The players are as tight as one would expect, and the mix is seamless. St. Louis immediately establishes the album’s vocal prowess, belting out the song’s heartfelt chorus…

“Today, it might be the worst day
The feelings are so strange
But I’m awake…”

Not Good Enough’s gentle opening guitar riff takes its time, rolling-in like a slow-moving thunderstorm. Rooted in the experience of anxious and lost love, the song expands into a beautifully desperate, 90’s-esque, rock ballad…

“What does it matter what I think?
It takes two to make this thing work out, and I am only one
And I’m tellin’ you how I feel

But it’s obviously not
Good enough for you…”

Our Favorite Track:
Follow You Down took about two bars to grab me by the throat. The mix features a heavy snare and a grimy guitar riff that brings to mind the likes of Collective Soul.

Stay was a close 2nd favorite. Delicate acoustic riffs and light piano notes play great contrast against the song’s otherwise angsty composition. Be sure to stick around for the guitar solo at 2:24.

“Music is my demon and my savior. It is the only way I can open a dialogue with the world. From my carefree days playing for chump change on the Sunset Strip, to soul-searching alone in my apartments, it is all I have. I give it away freely. The results are not up to me”.

What I Wouldn’t Give caps off St. Louis’ debut project in an equally sincere and heart-broken fashion as its seven predecessors. Once again, sterling writing, performance, and production create one last opportunity for Scott to exorcise a few last demons. It’s almost as if he’s got a secret formula, or blueprint, for how to make an emotionally stirring rock song…

With an abundance of catchy instrumental riffs and vocal hooks, Scott St. Louis’ self-titled, debut album offers a cathartic experience driven by good old-fashioned rock’n’roll—made the old-fashioned way by tenured artists with real instruments. Each song truly delivers on its own merits, while simultaneously setting the table for the next track.

St. Louis’ vocal presence is genuine and powerful, and ultimately sounds like a man—who’s singing about his own life—is supposed to sound. Musically, given their performance history, St. Louis’ cast is everything one could hope for, ultimately rendering a timeless project that feels completely effortless—and wildly familiar—at the same time. This is great rock music, folks. I’m hoping Mr. St. Louis doesn’t wait quite as long to record a follow-up.

Whose lovechild…?
Tom Petty & The Heartbreakers meets Better Than Ezra…

BELOW, you can listen to Scott St. Louis’ self-titled debut album, and connect with his website and social media platforms. Please support Scott St. Louis by visiting him online, and playing, downloading, and/or purchasing his music. And, as always, thank you for supporting real music!