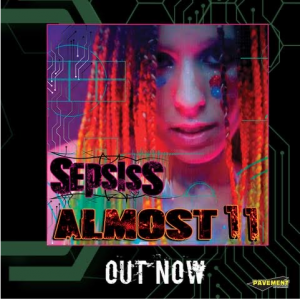 New England based and female-fronted, the heavy metal band Sepsiss has recently released their debut album Almost 11, following the release of the single Blacklight Invasion. The album was notably mixed and mastered by Grammy-nominated producer Glen Robinson. The bar is set high from the get-go, but the band delivers – Almost 11 has been described as “the people’s metal”, and we find that to be a more than apt description for this accessible, melodic, but still deliciously heavy selection of tracks.

Sepsiss has already seen a great deal of success in their field, winning the 2019 New England Metal Act of the Year at the New England Music Awards, as well as being signed by Pavement Entertainment in Chicago, Illinois. Their goal as a band is to attract more listeners to the metal genre, and we think you’ll find that after a listen through this debut effort, they’re well on their way.

From the first moments of the album, the vocals of Melissa Wolfe are on full display, and they remain a highlight across the project. Powerful and impassioned, her vocal tone lends just a touch of dark-pop sensibilities to this album and is a major contributor to its expansive appeal. The album kicks off with driving number Fair To Say that also introduces the skills of guitar players William Savant and Cam Loud, bringing intricate riffs and driving rhythm to the table.

To Write Hate On His Arms has a subtler introductory approach, full of delicate synthesizer and a distant, distorted vocal before the drums come crashing in. The execution is less rapid-fire and the notes are more deliberately spaced, even as the track picks up speed across its length. This song also features vocals from Savant, creating an intriguing male/female vocal dynamic that fits this track well. It’s easy to draw comparisons to Evanescence or even Flyleaf with a song like this.

We love the foreboding and almost swampy intro to Swarm, only emphasized by the boomy percussion and inclusion of the dramatic strings. The addition of the multiple breaks within this track that give the drums a moment to shine is a great production choice.

Eyes of Empathy is a great closer for the album, highlighting again the excellent and precise guitar playing, the subtle inclusion of synths, unabashedly powerful vocals from Wolfe (we get decidedly Hayley Williams vibes from the performance in this track), and solid melody writing that gives these songs an innate catchiness, something that’s so very rarely found within the metal genre.

We can see why Blacklight Invasion was chosen to be the feature track from this album. The intro showcases the rhythm section of this group in a most impressive way, with a serious set of drumming skills on display. Wolfe’s vocals are as strong and melodic as ever, in excellent contrast to the harsher stylings of Savant. Each instrument included in this track is doing something unique, which might suggest something that sounds overcrowded or chaotic, but that isn’t the case here. Each component’s asynchronous rhythms and differing melodies work together to create a piece of music that is distinctive and harmonious. It’s a great example of the accessible kind of metal tones that have become a signature sound for the band over the course of this album.

Powerful vocals and memorable melodies, interlaced with quintessentially metal riffs and rhythms. So many heavier bands prioritize intensity and speed over the actual musical qualities of their work, and it’s refreshing to hear a new group that doesn’t subscribe strictly to that philosophy. Sepsiss creates music that is unquestionably metal while remaining conscious of their end goal of helping to grow the genre, allowing more casual listeners of the genre to really sink their teeth into this music. Almost 11 will easily appeal to a far wider audience than the debuts of many of their contemporaries. Their foresight about this idea should serve them well for years to come, as we expect to hear a great deal more from this group in the future.

BELOW:  Listen to Almost 11 and connect with their website and social media platforms. Please support Sepsiss by visiting them online, and playing, downloading, and/or purchasing their music, or attending a live show! And, as always, thank you for supporting real music!

Listen to ALMOST 11 by SEPSISS: