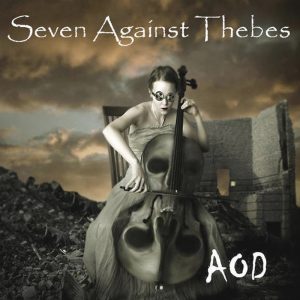 Originally formed in 2007, the Seattle, WA-based four-piece prog-metal outfit known as Seven Against Thebes (7AT) took their moniker in the spirit of any good metal band:  out of a strong dislike and distrust for the human species. For those of you not akin to the ways of metal, fear not, they also wear their title as a badge of honor, seeing 7AT as a metaphor for the iconic battle of good VS. evil.

“…7AT is a musical platform for misanthropy.”

With previous studio efforts including 2011’s self-titled debut album, Seven Against Thebes, as well as their Equilibrium EP, the 7AT crew has most recently released their latest 13-track monster of an album, Art Of Deception.

The slow, heavily distorted chords and eerie notes that make up MMXXII ultimately serve as a two minute intro for Til Death Do Us Part, a track which lends credence to the comparisons to Alice In Chains. In this ode to anti-marriage, stick around for a cool lo-fi-esque solo at 2:49. 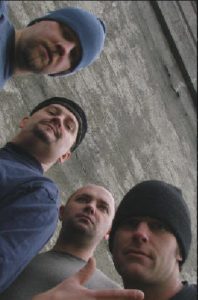 The album’s tribute to millennial apathy and indifference is definitely Killing Time, a track that brings 90s-era G&R to mind…

“Ten fold my indecisions have led me here
My mind on autopilot, my dreams disappear
So lay me down and let my soul sleep…”

With his Layne Staley-esque vocal timbre, Rusty Hoyle weaves a tale of humanity’s choice and consequence in Ashes 2 Ashes, a dark, minimalist, alt-rock piece which rarely needs anything more than Hoyle and bass…

“No hesitation, eye for eye
Retaliation, came from the sky
Grab your belongings, bars on the door
This is the dawning, of world-war-four…”

OUR FAVORITE TRACK…
Ink-heads everywhere, your anthem is here, check out, Slave 2 The Needle.

“The patterns of life were injected, into his skin with a consummate grace…”

I damn-well love a good instrumental piece. Showing their minimalist side once again (with a creative, experimental edge), the dreamy, psych-rock piece, 8 Husbands Of Cleopatra, sounds like something off of a 90’s-era Tarantino film.

IN CONCLUSION…
For those of you that either remember—or have sought-out—the gods of the 90’s hair and grunge rock-era, Seven Against Thebes’ second studio album, Art Of Deception, will be like a trip down memory-lane. The songs may be new, but the attitude and angst ring true and are immediately recognizable. Hand in hand with edgy, lyrical substance, are countless instances of lyric-less voids where the band simply took their time, experimenting with mood, sounds, and dynamics. This rare and creative ode to yesteryear’s style of music-making results in a body of work that makes the listener want to—keep listening. Get it?

WHOSE LOVECHILD..?
Alice In Chains meets Staind with a dash of 90’s-era Guns N’ Roses…

BELOW:  Listen to Seven Against Thebes latest album, Art of Deception, and connect with their website and social media platforms. Please support Seven Against Thebes by visiting them online, and playing, downloading, and/or purchasing their music. And, as always, thank you for supporting real music!

Listen to Seven Against Thebes latest album, Art of Deception: