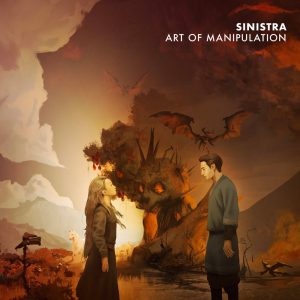 Originally from San José, Costa Rica, Antonio Masís has been heavily involved in music from a very young age. After years of school-based learning, Masis picked up a bass on his own at 17 and began his journey into the world of rock music. This journey has taken him to some impressive places. His primary band, Pneuma, has released 3 albums, opened for Metallica and Judas Priest, and toured Germany, Portugal, Mexico, and Panama, to name a few accomplishments. But today, we’re listening to a creation solely of Masís’ doing – Sinistra is an art and music project where each track features a different selection of graphic designers, artists, and musicians.

Sinistra quite literally translates to “left” in Italian – Masís says this name reflects the certain kinds of uniqueness that are often derived from being left-handed. To date, Sinistra has released 8 tracks and included the work of 23 different artists. On this project’s first single, Art of Manipulation, he’s featured Norman Mena (drums), Ari Lotringer (guitars), Marvin Picado (synths, additional bass), and himself on bass and vocals.

“Being left-handed is always a wild card in any sport of discipline. In baseball left-handed pitchers have a natural curve to their throwing motion and in art it is said that left-handed people have a different creative element they bring to the table. So it’s my take on trying to think differently and challenge myself to to aspire to new musical styles and influences.” – Antonio Masís

In Art of Manipulation, we’re treated to a range of influences and instruments from the start. The track begins with a delicate acoustic guitar intro, slowly introducing heavier synths into the mix. But when the percussion enters at 0:43, the straightforward prog-rock tones are cut by clear Middle Eastern influence. In fact, the addition of this unique percussion actually seems to bring out Middle-Eastern-esque tones in the guitar lines as well that were previously too subtle to detect on their own.

This track is so well balanced and produced that we would have been perfectly happy if it was only an instrumental, but the vocals are a welcome addition once they arrive. Masís’ voice suits the track extremely well, cutting clearly through the involved instrumentation. And here he proves again that he is a man of many talents – the lyrics in this track are poetic and well crafted, painting complex pictures of power and manipulation, as eluded to in the title:

“I am the maker of lost souls
Slithering in to take hold
If you give me the power to taste and devour, you’ll fold
You’ll do just what you’re told”

The track hangs onto its prog-rock roots in its length, as it clocks in at an impressive 6:37. But the metal influences become more clear the further we get into the track, adding and building on heavily distorted guitars that add a ragged edge to the overall tone, plus a few well-timed and quintessential metal drum fills. We also love the guitar solo from Lotringer in the final minute of the track – it puts his serious chops on full display.

But with plans to incorporate an extraordinarily wide range of instrumentation into future tracks (he mentions banjo, cello, violin, world percussion, synthesizers, acoustic bass, and others), it’s too soon to say what kind of sounds we can expect out of Masís going forward. What we can say is that Art of Manipulation is a musical masterpiece that highlights each featured musician’s strengths and brings them together in a completely cohesive and truly captivating track. With its impeccable production, illustrious lyrics, and unique genre combinations, Sinistra has quickly become a fan favorite here at The Ark, and we’re already looking forward to upcoming releases. 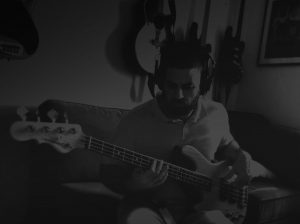 BELOW:  Listen to Art of Manipulation and connect with his website and social media platforms. Please support Sinistra by visiting him online, and playing, downloading, and/or purchasing his music, or attending a live show! And, as always, thank you for supporting real music!

Listen to ART OF MANIPULATION by SINISTRA: