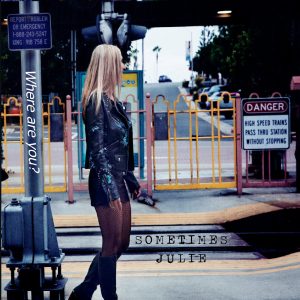 Rock group Sometimes Julie is well on their way to carving out a space for themselves in the burgeoning San Diego music scene. The band started as a duo consisting of  Monica Sorenson and Rick Walker in 2012 and has grown to include Bruce Paul Allen (bass), Anthony Sarain (keys, sax, flute), Alberto Moreno (lead guitar), and Dave Fuller (drums).

Sometimes Julie has a total of four releases under their belt, and they have been recognized for their efforts: the title track from their 2014 debut album Head First received radio airtime and also won an Akademia Music Award for best Americana Music Video. Their most recent release is an album titled Where Are You, and while this full-length record is rooted in quintessential rock tones, it has notes of Americana, hard rock, alternative, and even blues sounds, giving this group plenty of potential while showcasing the definitive skills they have to back up their sound. 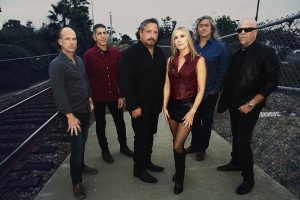 The album opens with the hard-hitting number She Can’t Kiss You, and right away we’re introduced to some of the strong points of this dynamic group. Sorenson has powerful, knock-you-off-your-feet vocals that are incredibly well suited to the style of music that Sometimes Julie is working in. With her soulful melodies at the center of this track, the rest of the band falls into place around her, with a driving beat, cutting (but well placed) guitar riffs that pull this track in a hard rock direction, and a solo that shows Moreno has a virtuosic level of skill on his instrument. Take note, other modern rock bands – this is exactly the kind of track you should use to introduce someone to your sound.

Following this is Knew It All Along, which echoes a lot of the same sentiments as the opening track, if not a bit more subdued. The guitar is a bit smoother, the rhythm section taking on less of a driving thunder and more of a sultry lilt, though when we get to the chorus it feels like Sorenson is channeling Heart in her delivery. Here we also get a good look at the band’s songwriting skills,with lyrics that tell a distinct story (which, in modern rock, is not something we see too often). As it turns out, there’s a poetic side to this rock group:

We love the positive, powerful message in Own Kind of Savior. In our ever-challenging world, messages of hope and strength are needed now more than ever, and this is exactly the kind of rock anthem to deliver a good one. Allowing the piano to shine in this one gives this song a softer texture, and allows the grit and emotion in the vocals to hit even harder.

Other standouts on this album include  Walk Among The Dead for its superb display of guitar skills & cutting, dynamic tone,  Love Me Gently for its jazzy undertones and saxophone feature, and Arachne’s Pride / Minerva for the wholly unexpected but totally welcome (and brilliantly played) classical guitar intro.

The album closes with Counting My Lucky Stars, and it’s a wise choice; the accessible melody and catchy guitar parts push this into pop-rock territory, and it also leaves the listener with some earworm riffs that will still be in your head long after the record has finished playing. A strong and catchy closer for an absolutely dynamic, boundary-pushing, masterpiece of an album.

As Good A Day As Any argues, should Sometimes Julie actually be an alt-blues band? This track feels so ridiculously authentic; fervent yet somber, the kind of track that grabs a hold of your soul for a minute and holds on. With its subtle build and minimal instrumentation, Sorenson’s vocals are just a shining beacon of emotion and passion. Their ability to strip things down even further proves their definitive skill as musicians – there’s absolutely no hiding behind any effects here. And to top it off, the song is beautifully written, both from a melodic and lyrical standpoint. The story of cutting a toxic person out of ones’ life will resonate with so many, and the feelings that are evoked in that kind of challenging situation are so poignantly represented in this track:

“Wish I could excuse your behavior,
Blame it on the drinks and drugs,
And your ever-troubled mind,
But I cannot be another casualty,
On your front line”

It’s a regular gripe from so many “true” rock fans that modern work in this genre just isn’t quite like it used to be. Sometimes Julie should be held up in proud defiance of that criticism. Where Are You has everything you could want in an effective, well-executed rock modern alternative rock album, an album that could easily stand among the best of them. With a great range of genre influence, an excellent collection of songwriting skills, and an absolute dynamite group of performers to back it all up – Sometimes Julie is the real deal, and all the proof you need of that is here on Where Are You. Listen to this album, and remember their name – we’d be willing to bet that this is only just the beginning for this talented group.

BELOW:  Listen to Where Are You by Sometimes Julie and connect with their website and social media platforms. Please support them by visiting them online, and playing, downloading, and/or purchasing their music, or attending a live show! And, as always, thank you for supporting real music!

Listen to WHERE ARE YOU by SOMETIMES JULIE:

Sometimes Julie · Where Are You?