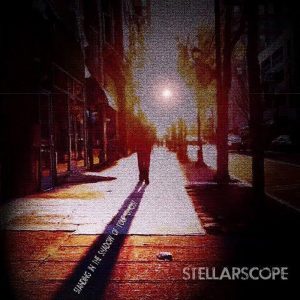 With their roots dating back to the late 90’s, the indie-alt-rock crew that makes up one of Philadelphia’s hometown favorites, Stellarscope, have a long list of accolades and accomplishments which any indie musician could find impressive. To date, on top of having their work included on countless compilations, tribute albums, and documentaries, they’ve also received love from MTV, A&E, the Discovery Channel, Alli Sports TV, and more.

A friend of mine once told me that you’ll know how good a movie is by the quality (or lack thereof) of its previews. I think the same can be said of a band’s influences. The influences listed above give good reason to become excited for Stellarscope’s latest album, Standing In The Shadow Of Your Ghost. And, as you’ll discover, I’d argue that the theory holds firmly true here.

Angsty, active rhythm slams into layer upon layer of both ambient and grimy guitars in Capsized. I also enjoy both the urgency and the attitude of the writing… 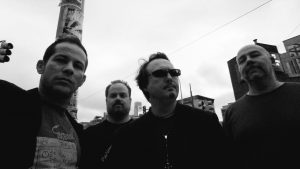 “Beat the drum and grab your guns
Need more drugs to make us numb
What have we done?

Our Favorite Track:
Like a dark B-side off of U2’s The Joshua Tree, Falling, bathes listeners in layers of digitally delayed guitars and ambient vocals. Ironically, despite its dark overtones, I find that the track’s overall composition and melody have an inspiring, creative appeal. As a musician, this is the kind of music that makes me want to…make music. Be sure to check out the instrumental break at 3:39—straight groovy, yo.

The alt-punk break-up anthem, Only Strangers Now sounds like David Bowie cut a track with The Flaming Lips! No, seriously! With its oscillating vocal and instrumental tracks, and funk-inspired rhythm, it’s a trippy, psychedelic ride.

Perhaps picking up where Only Strangers Now left off, the over six minutes that make up, All For You, conclude in an epic, hypnotic 2 & 1/2 minute instrumental—a celebratory free-for-all of anguish…

You Feel It Too is my first official encounter with what I would officially like to dub, Downtempo-Electro-Rock. Packed with waves of distorted guitar and synth, this sexually-charged, carnal creation keeps it very simple…

Having listened to countless acts as a music critic, I can safely announce that a tasteful amount of contrast is always key to producing a great body of work. That said, abstract in its composition—yet intentional in its mood and message—veteran indie-rockers Stellarscope have created that contrast masterfully in Standing In The Shadow Of Your Ghost. The group is to be commended for finding the courage to continually evolve and expand as artists.

Whose lovechild…?
Nine Inch Nails makes a record with The Cure…

BELOW, you can listen to Stellarscope’s album, Standing In The Shadow Of Your Ghost, and connect with their website and social media platforms. Please support Stellarscope by visiting them online, and playing, downloading, and/or purchasing their music. And, as always, thank you for supporting real music!

Listen to Stellarscope’s album, Standing In The Shadow Of Your Ghost: