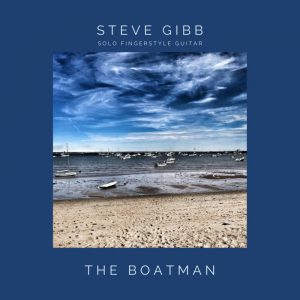 As you might imagine, we at The Ark hear all kinds of music on a daily basis, nearly every hour of every day. It’s a very rare occasion that something comes through our inbox that, from the very first measure of the very first song, is truly and honestly captivating. It’s the first warm morning after a long and hard winter; it’s a breath of fresh air from a crystal clear mountain top; it’s the music of Steve Gibb.

Gibb, a classical and fingerstyle guitarist, is originally from Inverness, Scotland, and began his musical career studying classical guitar and composition at the Royal Academy of Music in London. He has quite an expansive background in theater, including appearing in and working on shows like Buddy Holly – The Buddy Holly Story, Jersey Boys, Beautiful, Dear Evan Hansen, and School of Rock. He has also appeared alongside artists like Eartha Kitt, Petula Clark, and Il Divo, among many others. During the pandemic Gibb, like so many other musicians, found himself with enough time to create something new – and the instrumental album The Boatman was born. 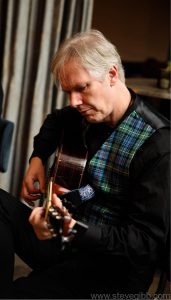 Truthfully this album needs no introduction – River Falls takes care of that. The opening track is a bright and balanced introduction to the impeccable, unrestrained skills of Gibb on his instrument. It takes a very practiced, very experienced performer to pull layered, piano-like melodies and rhythms out of a guitar, but Gibb achieves this on every track with an unbelievable sense of effortlessness. And River Falls shows that to us right away. It’s an angelic, bouncy melodic line over combinations of riffs and intricacies that make it feel orchestral in execution.

The other most impressive feature of Gibb’s work is his ability to create compositions that each have a completely different sound and style with just a single instrument. A guitar (primarily a 2012 Matthew Mustapick Custom Arena, for the curious) is all that appears on this album, but his arrangements and performances create such a wide variety of tones and rhythms that at times it’s hard to believe there weren’t more instruments involved. Take for example the open, resonant tones of Fear a’ Bhàta, and compare them with the bright, energetic, whirlwind of notes and phrases on Mackenzie’s Eyes  (a song written for his young daughter that paints a remarkable picture of the joy and spirit of a child).

Princeton Lament is a stand-out, with a dark melody and a melancholy undercurrent that seems to permeate every note in the composition. At times, the riffs almost seem to reach in a blues direction – only for split seconds at a time, but enough to bring a bit of that modern kind of soul and inflection into this track. We also love Elegy for a Rainbow, a stunning tribute to Gibb’s former guitar teacher who recently passed away. Here Gibb employs a classical guitar tremolo technique on a steel-string guitar, resulting in a unique and textured element that sits beautifully alongside the somber and softer lower notes.

Highland Cathedral is traditionally played on the bagpipes, but Gibb’s version on guitar gives this Scottish classic a completely different timbre. It retains the regality and solemnity of the original, and the melody is perfectly preserved, but the warmth and fullness of the guitar give it almost a magical quality, eluding to the likes of the happy endings of fairytales or enchanting lullabies. The harmonic intro – delicate, uncomplicated, and stunning – is simply the icing on the cake.

There’s so much more that could be said about this work. It’s poetic. Nuanced. Dynamic. Sensational. The Boatman is a fingerstyle guitar masterpiece, and Steve Gibb is the brilliant mind at the helm. Do your ears (and soul) a favor – put this album on and allow yourself to get lost in the otherworldly, ethereal, jaw-dropping melodies and compositions that are its absolute foundation.

BELOW:  Listen to The Boatman and connect with his website and social media platforms. Please support Steve Gibb by visiting him online, and playing, downloading, and/or purchasing his music, or attending a live show! And, as always, thank you for supporting real music!

Listen to THE BOATMAN by STEVE GIBB: