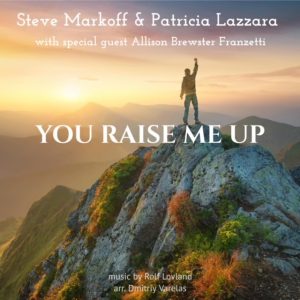 Here at The Ark, we’re no strangers to the calming and enthralling instrumental music created by the pair of Steve Markoff and Patricia Lazzara. We’ve had the pleasure of previously exploring their album Timeless (2019) as well as singles Liama (2020) and If I Could Reach Your Heart (2020), works we called “Tender and bright. A culmination of pure and soft spirit.” This year, this endlessly talented twosome is working on a new album titled Romances in Blue, which is scheduled for release in the spring. The album will be a classical crossover work, featuring both commission works and other non-released material from living composers, and will include the two previously mentioned singles. As a preview to what you might expect from Markoff and Lazzara later this year, they’re releasing their rendition of You Raise Me Up, the inspirational pop hit made famous by Josh Groban, and it provides precisely the kind of sonic respite and serenity that we’ve come to expect from this exceptional duo.

The composition includes Steve Markoff (alto flute), Patricia Lazzara (concert flute), and Allison Brewster Franzetti (piano), but at times this piece sounds like a complete orchestra; the trio has managed to create an incredibly full and well-balanced sound despite their small number. Opening with a perfectly ethereal piano that introduces the song’s main melody, the following flute entrance is pure and uncomplicated at the start. We glide gently through the familiarity of the track, building slowly with the introduction of the second flute. The musical chemistry in this performance is nearly palpable – indeed, the most compelling moments of this track always appear to be when both flutes are performing their perfectly complementary harmonies. 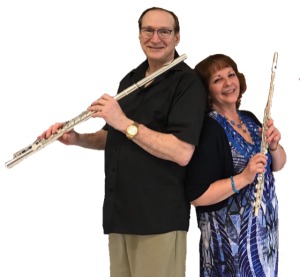 But in the second half of this song, we’re treated to a glorious display of technical skill. The breathtakingly intricate flute runs that are featured here are show-stopping, but never overwhelming. Like handspun lace, these little riffs are so chock full of detail and exquisite delicacy that it’s difficult to fathom the years of practice and skill that went into their creation. And then suddenly we’re eased back down into the outro, so effortlessly that you hardly notice the track is coming to an end, and it concludes with both flutes in perfect synchrony, a spot-on metaphor for this performance as a whole.

It’s no easy feat to cover a song like You Raise Me Up, known for its powerful and moving qualities as a composition, but equally as known for the unparalleled vocal performance from Groban. To replace the vocals with another instrument is bold, and to do it in such a magnificent and well-executed way is rare. To put it simply, this work by Steve Markoff and Patricia Lazzara is brilliant on every level. This will resonate with casual fans of classical music, fans of the popularized version of this track, and fans of seeing pure musical skill on display alike. If this is any indication of the quality we might be able to expect from any of their upcoming releases, then we suspect we’ll be on the edge of our seat in anticipation of more sublime performances like this until then.

BELOW:  Listen to You Raise Me Up by Steve Markoff & Patricia Lazzara and connect with their website and social media platforms. Please support them by visiting them online, and playing, downloading, and/or purchasing their music, or attending a live show! And, as always, thank you for supporting real music!

Listen to YOU RAISE ME UP by STEVE MARKOFF & PATRICIA LAZZARA: