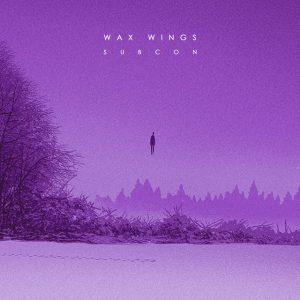 We come across so many artists who attempt to create the next innovation in genre mashups on a regular basis. It’s rare to find one that’s not only unique to us but equally as successful. However, artist Subcon has managed it with the release of his most recent single. Wax Wings is a brilliant combination of hip-hop and pop-punk styles, blending seamlessly into a reflective, trepidatious, and illustrative work.

Subcon – aka Brandon Ingram, is a Nashville-based songwriter, producer, and performer. Unsurprisingly his roots are in pop-punk and metalcore music, influences that are clearly present on his most recent release. His first EP was released not long ago by industry standards – My Own Archenemy debuted in December of 2019. In this short time, he’s managed to create a wholly unique and innovative sound of his own.

The track opens with a dark and deep picked guitar intro and is quickly joined by a classic hip-hop beat. Ingram’s vocal tone is reminiscent of the classic emo sound, but the production on said vocals again swings back in the direction of hip-hop with fairly heavy production. The inclusion of the synths and strings is a key component in blending the genres as they are the features that can be found subtly in both, and Ingram uses this to his advantage in order to blend all of the elements together. The track has a great build to the apex – which is the most definitely the bridge – and settles back down for a smooth and pensive exit following those explosive lines.

The lyrics – and the delivery of them by Ingram – do an excellent job of showcasing the crossover between these genres as well. It has the hard-hitting rhythm of a hip hop track combined with the revealing and familiarly melancholy lyrical stylings of a pop-punk track. The first verse has some of our favorite lines:

“There’s a war in my mind, and I’m losing
Try to concentrate on the grind, but it’s diffusing
Waking up confused every morning, why do I do this?
It’s gotten so useless, this fountain of youth is a figment of my mind
Where memories go to die”

Ingram says of the track’s inspiration that it comes from a place of personal highs and lows en route achieving his dreams. The title references the Greek mythological character Icarus, whose wax wings carried him too close to the sun and cost him his life. This fable stands as a symbolic representation of Ingram’s personal trials and tribulations, where he describes his fear of “crashing and burning” on the road to success. It’s an impressively complex and layered metaphorical concept, something not often seen in either of the genres this track primarily involves.

Overall, Subcon has done a masterful job with this track. It’s an expertly crafted story of strife and personal reflection that captures the essences of the combined genres at their very core. While this may be considered a hybrid now, Wax Wings is so successful with this combination that we wouldn’t be surprised to see it become more commonplace in the future. But that may speak more to Subcon’s abilities than the genre’s capacities to work together, as this track is a clear demonstration of artistic and production skill that has us looking forward to his next release.

BELOW:  Listen to Wax Wings and connect with his website and social media platforms. Please support  Subcon by visiting him online, and playing, downloading, and/or purchasing his music, or attending a live show! And, as always, thank you for supporting real music!

Listen to WAX WINGS by SUBCON: