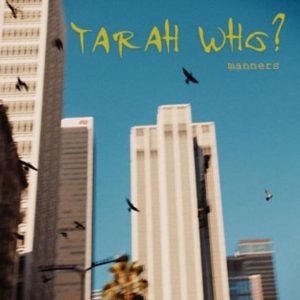 Duo Tarah Who? is the brainchild of the masterful performer and artist Tarah Carpenter. Carpenter is backed by drummer & vocalist Coralie Hervé, and together the two have released two full albums, three EPs, and a single in their signature hard-hitting style. The band’s work has been received with a great deal of critical acclaim, receiving attention from GIG Radar, Kill The Music, La Grosse Radio, Loud Stuff, Moshville, and other notable outlets, including an endorsement from Alanis Morissette’s guitarist Jason Orme. This all-female power duo’s recent single Manners highlights just why this group is turning so many prominent heads – this is a driving, cutting, piece of modern alt-rock that blends accessibility with true grit.

Rife with deep and distorted guitar riffs but truly driven and controlled by the drums, Manners wastes no time grabbing the listeners’ attention. The rhythmic changes are often the focal point of the track, creating a wholly pleasing variance in texture under an uncomplicated melody. It’s rapid-fire without being chaotic, intentional without feeling contrived. Building to a particularly heavy bridge, the intensity of the track’s ark concludes with a mirror of the introduction, a very satisfying and well-rounded song structure.

The track has a distinctly 90s cadence to it – perhaps most strongly reminiscent of what a female-led Foo Fighters could sound like. That said, this isn’t grunge rock for the fringe, hardcore fans, no – with its catchy, melodic riffs and composition that perhaps borders on pop-like sensibilities at some of the most critical moments, this is the kind of modern rock that can be consumed by fans across a wide spectrum of various rock enthusiasms.

One part alternative, one part punk, and one part true, unabashed rock n’ roll – what Tarah Who? is doing is on this single is breathing life and soul into their corner of modern rock music. Manners is a refreshingly straightforward, well-executed, absolutely memorable track that whets the sonic appetite for more from this talented twosome.

BELOW:  Listen to Manners and connect with her website and social media platforms. Please support Tarah Who? by visiting them online, and playing, downloading, and/or purchasing their music, or attending a live show! And, as always, thank you for supporting real music!

Listen to MANNERS by TARA WHO?: