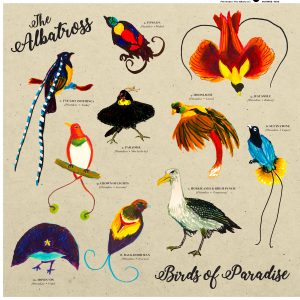 Columbia, SC rock and roll power trio The Albatross is back with their third release. We reviewed their sophomore effort Guns & Gold back in 2018, an album we found “a fun and fresh twist on an old and iconic genre.“(Check that review out here.) On their latest release, the group has continued largely down the same road – Birds of Paradise contrasts a modern sound with elements from music in days gone past in a genuine, unapologetic way.

“We wanted it sounding bright, yet warm. Immediate and punchy. We wanted a happy-sounding record.”

The band consists of brothers Jake Kiehl (guitar) and Ben Kiehl (drums) and long time friend Zack Stoudemayer (bass). Friend of the band Heath Smith from fellow local Columbia, SC rock band Big Thunder and the Rumblefish recorded the album with an eye towards capturing the band’s live sound. The result is an album with a sound that is authentic to the band, a record that makes no attempt to hide behind overproduction or excessive effects. It’s straightforward in its execution – here is a collection of solid, well-produced tunes that eclipse a variety of genres but maintain a cohesive rock-blues feel throughout. 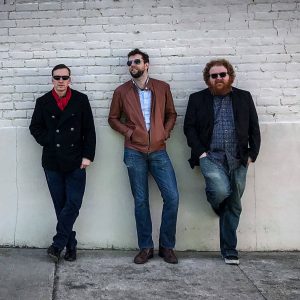 The intro to Paradise has a tight yet swampy opening guitar riff that has a bit of a CCR feel but segues nicely into a distinctly Goo Goo Dolls swing as it opens up. A great example of the juxtaposition that is retro against modern on this album. And who doesn’t love the addition of a solid bass solo?

Moonlight is delightfully old-school-bluesy in its approach. Fuzzed out guitars and the high energy drum beat get you tapping your toes almost immediately.

Crown of Lights feels like surf rock meets alt-punk rock – a Blink-182 vocal and guitar tone over some Beach Boys backing vocals and beat. The collection of sounds and instruments that follows at 1:15 sends the track in a more experimental direction but remains a true testament to the variety of sounds The Albatross is capable of commanding.

Closing the album is Movin’ On, introduced by the gorgeous and somber acoustic guitar. This feels like it could be a Crosby, Stills & Nash cover – the three-part harmony featured throughout the song is exquisite. All three members trade off lead vocals in this track, and it’s yet another great production choice that feels like a great comparison to the many components in this record coming together to make one cohesive sound.

Taking on a heavier overall tone, Set In Stone highlights the skills of both Jake and Ben in all directions – powerful vocals, great guitar chops, and solid intricate drumming with some really great fills. This track sounds like it could be lifted right out of the 70’s. Even the lyrics have that throwback feel:

“I went to the gypsy, she gave me a black cat bone,
she said ‘It won’t do you no good cause your bad luck and troubles are set in stone.'”

A sound far beyond the genre-restrictive words of “rock” and “blues”, but still identifiable a such. Modern in execution but fantastically retro in feel. Authentic and unrefined – a  real look into the inner workings of The Albatross. It’s not often that comparisons to so many great bands and artists come so easily and clearly. But Birds of Paradise is a composition with a timeless feel, made for those who want to live in the nostalgia of the music of days gone by while still looking forward to a bright, new, and truly unique kind of sound.

We stand by our previous comparison of Chuck Berry meets Blink-182, and we might add Creedence Clearwater Revival, or ZZ Top, or even some Led Zeppelin notes… the list goes on.

BELOW:  Listen to their album Birds of Paradise, and connect with their website and social media platforms. Please support The Albatross by visiting them online, and playing, downloading, and/or purchasing their music, or attending a live show! And, as always, thank you for supporting real music!

Listen to BIRDS OF PARADISE by THE ALBATROSS: