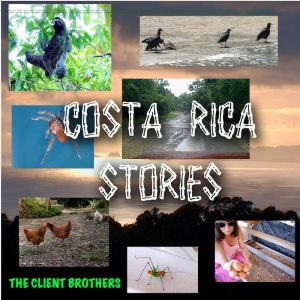 Longtime readers of The Ark will be extremely familiar with the music work of Costa Rica-based ex-pat Toby Tune (aka Harley Toberman) – we last introduced you to his instrumental album Introspection, where he created “intricate stories without words through mastery of musical composition“. Today, we’re moving in what might be considered the exact opposite direction of that project. Toby is one half of the duo The Client Brothers, and their most recent work is an eclectic, expressive collection of spoken word stories.

Toberman met the other half of this duo, Gregg Kubera, at the studio he used to own in Minneapolis where Kubera was a client. Toberman invited Kubera over one Tuesday for a songwriting session, which eventually turned into 28 years worth of Tuesday night songwriting. In that time, they’ve recorded two electronic albums, one jazz album, two vocal albums, and an 80’s industrial album together. The spoken word album Costa Rica Stories was originally completed in 2005, but is being released for the first time now in 2021. 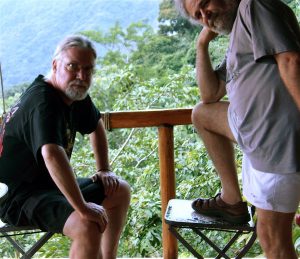 The stories begin with El Mercado, and right away we’re thrown headfirst into another world. The Client Brothers have achieved the perfect balance of effects and speech so that upon listening it’s incredibly easy to find yourself lost in the world being painted before you. In the first track, we’re treated to a vivid depiction of a Costa Rican bar, as seen through the eyes of a shrewd older man. It’s completely mesmerizing from the opening lines – the gruff timbre of the voice, the gentle chatter of other voices in the background, the bright, plucky notes of the tropical music that enters later on – it’s a movie for the ears.

In Birds of Escaleras, we’re treated to a tour through a local pool, overseen by the prickly and boisterous squatter named Dick, but truly harboring an expanse of natural wonders. The imagery described is stunning, painting a vivid, brightly-colored landscape where everything exists in perfect harmony. The music beneath each illustrative section changes just enough to alter your perception of what’s being described, but not enough to take away from the poetic word choice or make the music the focal point. It’s indeed the perfect complement to the story.

Another stand out is Rain Songs, starting with an intense and orchestral musical base, joined later by an electric guitar to both accentuate the story and add an alternative sonic texture that is wholly appreciated and welcome. This track describes an otherwise peaceful day interrupted by gunfire, and it walks us deliberately through the moment in which it occurred along with musings as to why. It’s an uncomplicated event, with little pomp or circumstance, but this factor in and of itself is why this story (and every story on this album) will ring true with any listener. At its core, it is remarkably human.

Rainy Season is fully action-packed and has a silver-screen-esque build all its own. We start by simply talking about the many names there are for the rain, but by the end, we are fully enveloped in its awe-inspiring power and intensity. The rain itself is described in such a way that it’s almost effortless to imagine yourself in the scene, moving frantically toward your car in a torrential downpour that prevents nearly any kind of visibility. The drive that follows is a nail-biter, with the music beneath the words accentuating the level of intensity and drama measure by measure. The final descriptor of the man in his truck, floating down the river towards the sea, is penetrating and haunting.

Perfectly descriptive without being tedious, captivating while still feeling utterly realistic. If you didn’t want to visit Costa Rica before, you will after The Client Brothers have told you their stories. This is a complete adventure wrapped up in seven short tracks. Each story will demand your full attention, and you’ll give it willingly, as each is so beautifully written, spoken, and accompanied. Listen through Costa Rica Stories – then listen again, then maybe a third time, to let the full weight of the words and the world they create sink in, and enjoy every immersive minute in this tropical paradise without ever getting up off the couch.

BELOW:  Listen to Costa Rica Stories and support The Client Brothers by streaming their music! And, as always, thank you for supporting real music!

Listen to COSTA RICA STORIES by THE CLIENT BROTHERS: