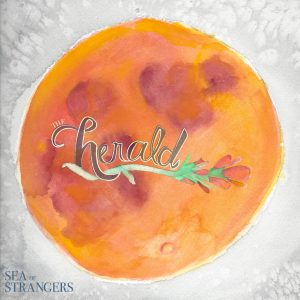 The alt-rock foursome known as, The Herald, met while attending the University of North Texas, in Denton. Officially a band as of 2015, it took little time to get the creative juices flowing, as the group’s first EP, 2016’s Growing Room, was released soon after.

Consisting of:  Tanner Bowden (lead Vocals, guitar), Chris Fernandez (vocals, bass), Ben Claffey (lead guitar), and Ryan LaLone (drums, percussion), the creativity has continued with the release of their first full-length album, Sea Of Strangers, a silky-smooth, collection of ultra-mellow alt-rock tracks with underpinnings of jazz and funk—which the band-members themselves describe as a concept album about relationships.

Opening their sophomore project is the album’s title track, Sea Of Strangers, an ambient, chilled-out track that immediately took me back to 2001 and 311’s classic, Amber.

Welcome Party, for this music critic, makes this beautiful irony of The Heralds’ music a fact:  These boys are piecing together tough, brutally honest, and borderline existential subject matter; with flavorful, friendly melodies; which, when contrasted with the lyrical content, are more or less—polar opposites. I find it all quite impressive, and it leaves me wondering weather or not it was all intentional…or therapeutic…or both. I suspect, both…

“It’s great to be alive, the spirits try to contrive
To bring me out onto their plane
I’m stuck inside a shell, it’s hollow, dark, cold as hell
Just another cage for my brain…”

The intro to Brightest Lights Go Out is reminiscent of the intro for 1991’s Release Me by Pearl Jam. Once again, the boys wrap—sobering subject matter—up into a harmless, atmospheric, semi-jazzy bow and ribbon; which, by the track’s second half has me thinking of mid-2000s-era Coldplay…

I haven’t been the same, since we parted ways
Stressed and filled with doubt, even the brightest lights go out…”

Impossible to know for whom Deep Breaths was written, though it’s a clear redemption piece that hits home for someone.

Our Favorite Track:
Delicate electric-finger-picking and a lone, vocal track with just the right amount of reverb, creates a Scorpions-esque intro for Side By Side.

The long electric guitar notes and frequent tempo changes give All’s Well That Ends… a very Pink Floyd-vibe. The complex dynamics of this final track capture, spotlight, and summarize this group’s musical intentions quite well. With minimal lyrics, the music is allowed to complete the record in a classy, enjoyable fashion.

With tons of instrumental breaks—which the boys fill with plenty of airy, ambient guitar tones—and crystal clear production, The Herald’s sophomore effort, Sea Of Strangers is a highly enjoyable collection of songs which absolutely stays true to itself throughout the 11-track ride. On top of that, Bowden’s voice is perfect for the band’s sound, and carries an Adam Levine-esque quality. All in all, a stellar 2nd effort, and a cooled-down, laid-back antidote and/or response to the fires of modern life.

BELOW:  Listen to The Herald’s album, Sea of Strangers, and connect with their website and social media platforms. Please support The Herald by visiting them online, and playing, downloading, and/or purchasing their music. And, as always, thank you for supporting real music!

Listen to The Herald’s album, Sea of Strangers: