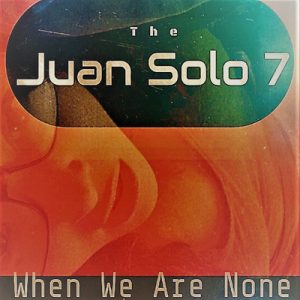 Jason Nunn is no stranger to the music industry. A previous member of the band Breed13, Nunn has toured the east coast, released two full-length records (Saturated in 1993 and A Reason to Hit Kevin in 1996), shared the stage with Collective Soul, Atheneum, and Archers of Loaf, and even played at legendary club CBGBs on multiple occasions. In short – he’s the real deal. Nunn is currently releasing music under the artist name The Juan Solo 7, and his latest release is an indie alt-rock project titled When We Are None.

From Raleigh NC, Nunn is currently the sole member of this project, writing and performing each song in its entirety. Fans of the legendary bands Breed13 used to share the stage with can dig their teeth into Nunn’s newest work with vigor – When We Are None is spacey indie rock with a ragged edge. 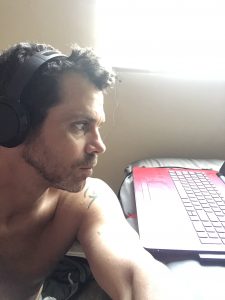 The intro to Roller Derby is heavy on a catchy riff played by a super fuzzed-out bass. The guitar solo further into the track shows some solid chops, and then the solo stops abruptly to bring us back to the bass riff from the beginning before building back into a big chorus. It’s a great rise-and-fall balance.

The general tone on My Place is a bit more optimistic than some of the other tracks, and the instrumentation even heavier than the tracks proceeding it. The drum fill right before the lyrics come in is rapid-fire and super tight. But the lyrics contrast the heaviness and speak of someone happy to have found a lover:

“Chase this high to find my place, eat that smile to numb my face, I’m not going home tonight alone.”

Caribou leans hard into the indie-alt-rock genre. The leading guitar riff is heavy but still melodic, and the rhythm guitar in the back sets a slightly lighter tone for the verses than the choruses. The lyrics here are also interesting and create a bit of intrigue as Nunn sings:

“Sometimes I’m crazy and it’s just a disguise, it holds the truth and hides the lies. And you’ve got all your faces too, how do you know which one to use.”

Qi is a 6+ minute monster of a song. The often spacey and sustained guitar over the well-balanced drums makes for a great base. The occasional appearance of dissonant melodic notes here and there build tension and keeps the listener guessing as to where the track is going. The last two minutes of the song showcase another appearance of those solid guitar chops we mentioned as well. And the lyrics have a great, universal message, stating:

“Gonna do things my own way, I enjoy the view. Gonna take my time today.”

Hard, heavy alt-rock with spacey undertones. Great guitar playing and tone choices, and high-level production across the board. When We Are None is a solid showing of both composing and performing talent from The Juan Solo 7. If you’re looking for some new music that has all of the old feelings of an iconic 90’s rock band, When We are None is definitely worth a listen.

Tool meets Foo Fighters, and maybe a touch of Nirvana for good measure.

BELOW:  Listen to his album When We are None and connect with his website and social media platforms. Please support The Juan Solo 7 by visiting him online, and playing, downloading, and/or purchasing his music, or attending a live show! And, as always, thank you for supporting real music!

Listen to WHEN WE ARE NONE by THE JUAN SOLO 7: