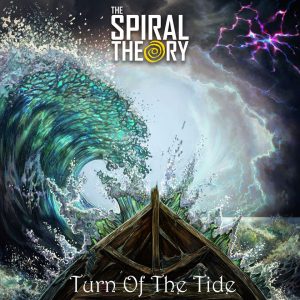 Toronto-based four-piece The Spiral Theory is looking to redefine the sounds of modern rock on their debut release. Blending classic guitar tones with modern melodies and progressive rhythms, the band’s eight-track project Turn of the Tide contains clear influence from iconic classic rock sounds, combined with an original, melodic take on their genre.

The band consists of Sandeep Swaminathan (Lead Vocals, Rhythm Guitar), Joe Liranzo (Lead Guitar, Backing Vocals), Alan Dennis (Drums), and Clarence Poirier (Bass).  With influences like The Police, U2, and R.E.M., The Spiral Theory‘s debut has a lot to love for both classic and modern rock enthusiasts alike. 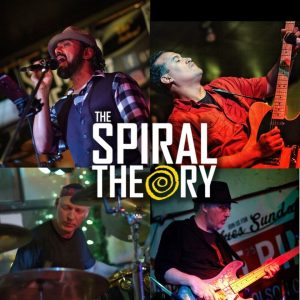 HERE’S WHAT WE DUG MOST…
The classic rock influence is definitely apparent from the very beginning, but it doesn’t feel like an imitation – rather it’s delivered in a way that still feels contemporary and fresh. Opening with Brace For Echo, many of the bands’ strengths are on immediate display. A tight, punchy rhythm section to keep things moving, decidedly vintage guitar tones (as promised), and well-crafted melodies at the focal point make this a sonic treat for the ears.

Shoreline is a touch mellower, the sparkly, dreamy guitar tone over a gentler rhythm giving off a summery, beachy vibe. It bounces between this and a modern rock sound that, by this point in the album, is starting to become familiar as the band’s primary tone. The guitar solo at 3:13 is especially nice, a soulful and dynamic element on this track.

The bluesy undercurrent of Joker’s Game is a masterful showing of the band’s ability to blend those classic and modern rock tones together. The intro guitar riff has a heavy dose of 70’s era twang both tonally and melodically, and the drumbeat reflects this as well. The vocal melody enters, feeling a bit more contemporary, and by the time we reach the chorus the track sounds decades more modern than where we started. It would be easy for this to feel disjointed, but not here – this track flows effortlessly from section to section and is a comprehensive picture of the bands’ skills.

The vocals on this record are certainly worth mentioning, and they’re perhaps best showcased on Open Your Eyes. Swaminathan’s lead vocals are consistently powerful, with a strong vibrato that’s slightly reminiscent of Dio or perhaps Roy Orbison on some of the faster tracks. Open Your Eyes showcases a subtler, softer side of the entire band, but of the lead vocals especially; there’s a particularly enjoyable vulnerability there on this track. The harmonies in the chorus are an excellent addition, adding even more dimension.

The rhythmic and occasionally dissonant Dirty Water is a high point for the instrumentation on this album – the guitars, bass, and percussion all get multiple moments in the sun. There’s a great flow throughout this track as each instrument is brought to the forefront of the mix in turn, and everything is both executed and produced near perfectly. The result is an excellent blending of all the instruments without the song ever feeling muddied or overcrowded. It speaks to the band’s abilities beyond performance and songwriting – as they also produced this record, it seems they have an excellent handle on that as well.

Classic in feel but modern in execution. A tight, well-rehearsed band whose influences make a clear appearance in their own material while seamlessly blending them with their own musical ideas. Turn of the Tide is a refreshing, energetic, and truly enjoyable listening experience from The Spiral Theory, and at times it’s hard to believe it’s only their debut album. We look forward to plenty more great releases like this one from these talented Canadian rockers.

BELOW:  Listen to Turn of the Tide and connect with their website and social media platforms. Please support The Spiral Theory by visiting them online, and playing, downloading, and/or purchasing their music, or attending a live show! And, as always, thank you for supporting real music!

Listen to TURN OF THE TIDE by THE SPIRAL THEORY: