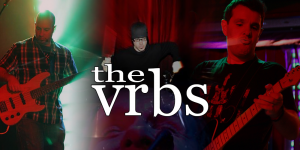 San Francisco-based rockers The Vrbs has been bringing their unique blend of alt-rock and power-pop to fans since 2019. Comprised of Jared Richard (guitars, vocals), Paul Cingolani (bass), and Jeff Ham (percussion), the trio recently released their debut self-titled album. A complex 15 track release, this project is also a true concept album, its two distinct halves earning it a second title: Black & White.

The album opener Take Me Home is a vibrant and consumable introduction to the group’s sound. With quality musicianship and cohesion abounding, this track features memorable guitar riffs, a catchy hook, and a simple but markedly effective guitar solo at 2:05.

The band tells us that the first eight tracks comprise the White side of the album and leans in a more upbeat direction. We find this sentiment rings true, especially the driving rhythms and punk energy on New Drug and the memorable staccato instrumentation and rich and layered vocals of Without You.

Under The Sea marks the end of the White movement and is no doubt a stand out moment on this project. A softer and warm timbre dominate the first half of the track, even as it grows in intensity and opens up into something grounded firmly in alternative rock elements (and also features some of Richard’s most impressive vocal work on the project). But the descent into darkness that takes hold in the second half of the track is a clear sonic shift – the band tells us it’s representative of the death of the main character, which opens the door for the much heavier-handed Black album.

From this point on, we are firmly rooted in a much more foreboding sound. Gravity introduces this new theme to us with crunchy guitars and a vocal line that moves between a whisper, a growl, and a scream, imparting anger and bitterness with authenticity. We dive even deeper with the harsh electronic sounds and ominous vocals of Closer, and the intense messaging and rapid-fire riffs of Blow It Up.

But the band does provide us with a resolution after we make it through the darkness. Closing the album is the epic Down the Mountain,  much softer than the rest of the Black side of the album. With strummy guitars and a much more relaxed tone for much of the track, we can feel that the main character has arrived at peace and acceptance. Richard’s textured and powerful vocals do an expert job of selling the story, especially at the track’s peak where it feels we have returned to the White album for a moment. It’s a satisfying and musically powerful conclusion to a complex storyline.

There are so many reasons to be excited about The Vrbs. From their in-depth creative vision, their undeniable musical chemistry, their thoughtful songwriting, their artistic versatility – this trio is the full package. Stream this memorable album for yourself below, and commit the name The Vrbs to memory – we’re sure this won’t be the last you hear of this talented group.

BELOW:  Listen to The VRBS and connect with their website and social media platforms. Please support The VRBS by visiting them online, and playing, downloading, and/or purchasing their music, or attending a live show! And, as always, thank you for supporting real music!

Listen to THE VRBS by THE VRBS: