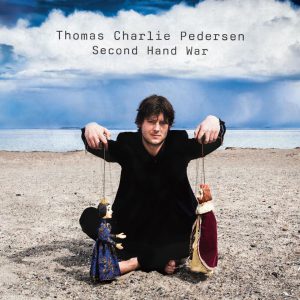 Q:  You’ve been playing with your band, Vinyl Floor, for around 10 years! What inspired you to create this solo project, Second Hand War, on your own? (A really lovely album, by the way.)
A:  Thank you! Well, I guess there´s quite a few reasons. Firstly, I’ve kind of played with the idea for a while that someday I might do something on my own. Vinyl Floor is very much a perfect outlet for me since everybody´s writing and being very open to a lot of different ideas. It’s just that I’ve been writing this kind of very quiet and moody songs for a long time now – songs that I haven´t really envisioned a full band playing on. And it just got to the point where this batch of songs would accumulate into a dusty pile unless I cleaned the shelf a little bit.
Secondly, the band has been taking its time recently writing new tunes and recording demos. An exciting process, but it did leave me with some extra time to focus on other things.
Thirdly, I was battling some personal stuff around that time. I didn’t have a place to stay and therefore moved into our rehearsal/recording space in the countryside. There was a bed, a shower and plenty of time for me to reflect, read and write. And maybe the winter spirit got a certain hold of me, I don´t know, it just felt like the right time to do it. I was also aware that I needed some help with the recording, but it had to be somebody who really knows me. Someone who could make me comfortable. So I called my brother (who’s also in the band) and luckily for me, he was happy to oblige.

Q:  Your roots are in Copenhagen, Denmark, a place we’ve never been—but have heard great things about. Tell us about the music scene there, and how it influenced and inspired you and your band’s music?
A:  We’ve been shaped by both the city and the rural surroundings at our studio, and I think our music reflects that. Even though we live in the city we kind of need to run away from it sometimes, you know? So we´re not always up to date with what´s happening. We haven´t been very much present on the scene across the city recently. Mainly because we tend to indulge ourselves in writing and recording a lot. But it´s something we wish to do more. Pardon me for getting off on a tangent here. The Copenhagen scene is flourishing and has tons of variety, for sure.

Q:  How long did Second Hand War take to record and produce?
A:  Oh, it was done rather quickly. I remember telling my brother that we shouldn’t over-analyze it and not try to make it perfect. A personal crisis is not perfect. It´s OK if you hear the ache and the slight mistakes. I´m probably sometimes terrible at over-analyzing myself and if a recording process gets too far-stretched I tend to start doubting it. I think we did 4-5 days during Christmas and then 4 or 5 more days in the new year. It was mixed and mastered during spring. 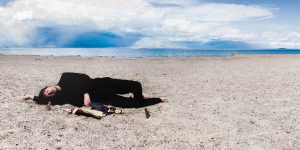 Q:  In a musical era of, often times, over-produced electronic pop music, Second Hand War has a refreshing agenda of simplicity and minimalism. Did this intention make the recording process easier, or more difficult? More or less fun?
A:  That’s a very good question. I feared it would be hard to omit other possible instrumentation, other possible arrangements. Also, it was sort of nerve-wracking for me to put myself upfront in such a vulnerable situation where my strengths and limitations are on full display, you know? But sometimes the things that aren’t perfect and what is NOT being played could be the most important aspect of a song. It makes things breathe and I knew the tunes were good. Once we started recording it went very smooth, and it happened in a very relaxed environment, too. It was a fun record to make.

Q:  The album’s second track, Appreciation Hymn is just brilliant. Can you share with us what inspired that song?
A:  That song is one of the songs that were finalized right before I chose what to record. ‘I For One’ and ‘High Dust Devils’ were late additions too. ‘Appreciation Hymn’ is probably the most direct song, if you like. It´s about looking back on a long-term relationship. It´s very personal for sure. I sometimes like to write chorus-free, storytelling songs….

Q:  Tell us about Second Hand War‘s album cover?
A:  Sometime during the recording process I had this idea of myself on a beach – playing with these puppets. I knew we had to try and capture some kind of unsettling mood. There had to be some kind of tension. I told my cousin, who’s a very good photographer, about the half-baked idea. He immediately warmed to it. One day in April we went to the beach here in Copenhagen. The sun was shining but it was pretty cold. The dramatic cloud formation in the background just happened to be there. Some think it has been added afterwards but it´s not. What you see is 100% real. Guess we were just lucky!

Q:  Can you tell us about the first moment you picked up a guitar/instrument with the intention of being a musician? What was your first guitar/instrument? Do you still have/play it?
A:  I started out as a drummer around the age of 5. I didn’t have a kit until years later so, believe it or not, I made a kit out of pillows from the couch. At the age of 14 I had my first guitar. It was a gift from my late grandfather who played jazz in his youth. It was a Hofner guitar. A bit thin sounding but very cool. I wrote my first songs on it. I still have it!

Q:  Perhaps in some unspecified amount of time, your musical career explodes in the best of ways…what does that look like for you?
A:  It depends. I can do without many sorts of fame and getting recognized on the street. I write to make myself happy and if other people appreciate what I do, then I´m happy too. I’d be perfectly satisfied with playing to a small but dedicated crowd. I’ve never been driven by money, that´s for sure. It´s about the art.

Q:  You get to collaborate with anyone of your choosing. Who is it?
A:  Bob Dylan. Even though he´s probably not much of a collaborator.

Q:  Your favorite album of all time? (Be brave, you gotta choose one!)
A:  ‘White Album’ by the Beatles is one of them. Perfect imperfection.

Q:  Your favorite comfort food?
A:  Tacos of all kinds.

Q:  Your favorite sports team and/or pastime?
A:  Not much of a sports team fan here, but I do a lot of swimming and running.

Q:  What would you like fans to know about you that they’re most likely unaware of?
A:  I own a Meat Loaf record.

Q:  Any shout-outs you wanna make?
A:  A shout-out to you guys. Thanks for having me.

(All 14 tracks will play in succession. Enjoy!)