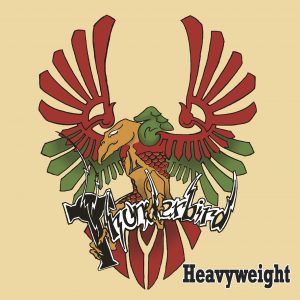 If you thought the classic hair-band music of the late 70’s and through the 80’s was dead and gone…think again. Hard rock veterans, Thunderbird are keeping the genre alive and well, and are doing so with original, hand-crafted material. There is simply no need for cover songs with this kind of talent in your line-up:

Following the success of the band’s first album, 2006’s What’s the Word, life got the better of the boys, and they went their separate ways, scattering across the globe to Canada, Australia, the UK, and Costa Rica. Though, when the music came calling again, even that distance was not enough to keep them apart for good. Now, ten years later, reunited with a purpose, the boys of Thunderbird dug in their heels and put in the work in order to release a 16-track, flat-out monster of an album…the appropriately named, Heavyweight.

Here’s what we dug the most…

“Do you regret the choices that you made?
Now judgment day is near, the piper must be paid
And you’ll be lying here in the bed you made
Beyond a shadow of a doubt – look out!
To them you’re still a dog”

The fourth and album title track, Heavy Weight—a song of triumph and redemption—offers an impressive array of dynamic transitions between its ambient verse, and its explosive (borderline metal-tempo) chorus. The musicianship here shows mastery, as each band member seems to drift, ebb and flow at their own tempo and in their own reality, yet remain on point together. This is a really, really good song.

The Set-Up immediately reminded me of Megadeth’s Symphony of Destruction. Near the midpoint, there’s a great slow-down/interlude that gives the song tons of personality. The track details the life of a wayward youth whose bad luck got the better of him. I would love to know who the song was written about. 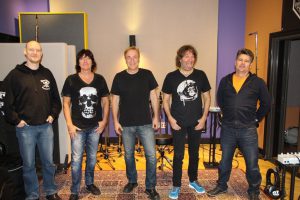 Leave It Alone hits hard and shuts it down quick. Only two-and-a-half minutes long, it left me wanting more.

Steve Mulry guest-stars at vocals in On The Prowl, which brings classic rock-musician showmanship and 80’s style lyrics. Seriously, it’s like Warrant meets ZZ Top on this thing!

Our Favorite Track:
Go, a three minute and forty-seven second instrumental of rip-roaring, Van Halen-esque guitar. Quite honestly, the song feels like a bank robbery on steroids. It belongs on your workout playlist.

As I was taking in Heavyweight for perhaps the fourth time, I couldn’t help but think of how much work and dedication the project must have taken in order to corral the five band members and three guest performers—who were spread across the globe—and keep them together long enough to record sixteen songs! It is an impressive feat, to say the least, and the effort comes off in the music. It’s very clear that these guys are pros. The music is not only technically sharp, it’s also adventurously creative and daring. Yes, daring. Disagree? If so, I would challenge you to try to record a 16 track album of 80’s hairband style tunes which are good enough to be relevant in today’s music scene. Understand? Thunderbird did it, and they deserve your respect.

Whose lovechild…?
Clearly, there are countless elemental reminders of—and nods toward—many legends on this album (i.e.,  ZZ Top, Van Halen, Motley Crue, etc.). But what I’m hearing over and over, is the blending of Skid Row & AC/DC. Yeah…it’s just good stuff.

Below, you can listen to Thunderbird’s album, Heavyweight, connect with their social media platforms, and find their contact information. Please support Thunderbird by visiting them online, and playing, downloading, and/or purchasing their music. And, as always, thank you for supporting real music!

(The entire 16 track album will play in succession. Enjoy!)

(The entire 12 track album will play in succession. Enjoy!)