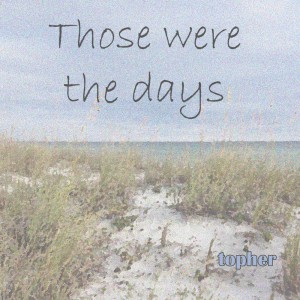 Topher (a.k.a., Toph Mc, Mama Toe, Topher McGill, etc.) is one of those artists that has absolutely no clue how talented he is. Which is why music lovers—love his music. Because when great music combines with humility, everybody wins—especially the listeners, you and me.

Born and raised in Mobile, AL, it ultimately took only two criteria for Topher to pick up his first ax (a $40 dollar used acoustic guitar his pop bought him at a pawn shop) when he was a mere thirteen years old:

Now, over thirty years later, he has set his sights on recording his craft. His new single, Those Were the Days was named after a period of his childhood which Topher describes as a time, “…when things were so uncomplicated. It was a time when life, at least my life, was easier.” Indeed the idea of simpler times is more than just a theme for this song. It’s an intention that comes through, strong and bright. 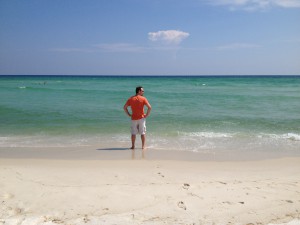 Having the pleasure of being present “behind the board” while Topher recorded the piece, I can testify to the ironic disproportion that exists between how simple and light the song sounds—and the complex finger work required to play it. Two rhythm guitars provide a melodic major-chord base, while a third soloing guitar soars, dives, and climbs once more, dancing over, around, and between the others.

One of my favorite instrumental albums of all time is “In My Time” by Yanni. If, while Yanni was preparing to record that album, he had decided to pick up a guitar—rather than sitting down at a piano—music like Those Were the Days may have been the result. If you close your eyes while you listen, you might find your mind drifting to the early, simpler times that Topher mentioned, to rolling hills, tag in the park, and Sunday evening sunsets. Don’t be surprised if, by the time the song finishes, you find a grin has snuck its way onto your face and one simple thought has crossed your mind… “Ahhh, those where the days.”

Below, you can listen to Topher McGill’s single, Those Were the Days, check out our interview with him, and connect with him on social media. Please support this artist by visiting him online, and playing, downloading and/or purchasing his music. And, as always, thank you for supporting real music!

Listen to Those Were the Days by Topher McGill: