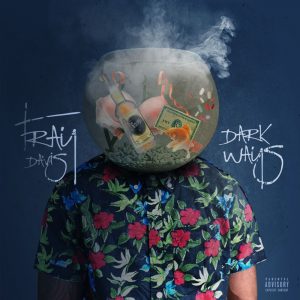 Originally from Florida, artist Tray Davis is currently based on the west coast in California. Davis has been writing music for the last decade across multiple genres. In 2017 he began recording his work and released several singles alongside his debut EP, Urgent Care. He’s continued melding hip-hop and pop sounds on his most recent 2020 release, Dark Ways, the EP which we have the pleasure of getting our hands on today.

The EP opens with Devil on Vacation, and we’re greeted with high-level, well-balanced modern production that is instantly energetic. The catchy synth riffs are memorable and permeate the track, and have just a hint of tropical flair, perhaps in reference to the track’s title. Davis has a smooth, intense flow in his rap, which, combined with the syncopated and rhythmic backing instrumentation, holds the listeners’ attention easily and keeps us guessing as to where the track is going – this is meant as a compliment, as it’s easy to be too repetitive in this genre and Davis has clearly sidestepped that pitfall. The addition of the harmony at 1:37 cements the hip-hop/pop crossover feel, giving this track the melodic variety it needs to transcend both genres.

The elements from the first track can be found consistently across this project in some form or another in every track, but each song undoubtedly has its own flair within the scope of the record. Gin For My Sins has a great intro – the heavy effects allow for a slow build and sudden drop when the beat kicks in, which is the driving force in this track. Lee Sun features string sounds in the production, creating smoother backing instrumentation and adding drama to the track. Less Than Bestfriends incorporates a particularly bouncy instrument melody and a slow build, adding and removing both bass tones and percussion before bringing them back in together later in the track. It’s the small production choices and attention to detail in the instrumentation that makes this album enjoyable.

In Bad Health combines two completely different kinds of instrumentation to create a track with a totally unique feel. The old-school, slightly out of tune piano and trumpet-esque background synth over an unquestionably modern hip-hop beat is a great production choice, as the juxtaposition of these two remarkably different tones is unexpected, but they work surprisingly well together. This combined with Davis’ impassioned and dark lyrics and intense vocal tone makes this a stand-out track on the EP.

This EP lives up to its name again and again. Tray Davis has written something with edge and intent and has packaged it for his listeners with great melodic hooks, expert-level production, and quality rapping. It’s a great mix of pop and hip-hop sounds that has plenty to love for afficiandos of both genres. Give Dark Ways a listen – you won’t be disappointed.

BELOW:  Listen to Dark Ways and connect with his social media platforms. Please support Tray Davis by visiting him online, and playing, downloading, and/or purchasing his music, or attending a live show! And, as always, thank you for supporting real music!