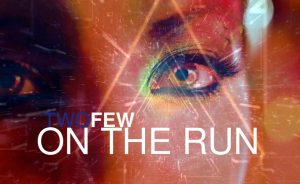 Alt-piano-rock foursome TWOFEW has recently released their debut single, a soaring and evocative power ballad titled On The Run. The group got their start as a duo between husband and wife Michael and Danielle Lazar. After the release of a three-song EP, the duo added Michael’s brother David Lazar and Erik Fernandez to round out the band. The resulting combination is a talented, powerful group of musicians who have created a compelling sound on their debut release.

The band tells us that the song was inspired by accepting situations that are beyond your control. The band’s lead singer suffers from Lupus, and they recently lost a friend to the same disease (and the band has touchingly dedicated this track to her). Facing one’s mortality, especially through the loss of a friend, is both devastating and frightening. However, TWOFEW has created something profoundly beautiful from the sadness.

On The Run starts with haunting, melancholy guitar picking and deep piano, slowly building into a solid, driving rhythm. The vocals are particularly strong at their entrance, both powerful and so clearly full of emotion, with a raw intensity that makes them a high point of this track. It’s a bit reminiscent of a Shinedown tune, with a slightly more modern edge.

Despite the very personal struggle that inspired this track, the message is undeniably relatable to so many, and for so many reasons. Instead of stating facts and painting pictures, the lyrics in this song are pulled from a place of emotion, describing the internal strife in a difficult situation rather than spelling out the situation itself. This results in a chorus that will resonate with so many people:

The video the band has produced for this track is particularly captivating, combining a futuristic world with a much more primitive one. The video primarily consists of contrasting shots of beautiful, ornately dressed people from a futuristic world against haggard-looking men with swords and shields fighting over a woman in their time. These scenes couldn’t be more different from each other, perhaps indicating that the internal conflict of running from one’s own mortality is a concept that spans all of time? Regardless of their intent, it’s a very well shot video that has an enthralling, hypnotic quality.

Overall, this is a strong debut effort from TWOFEW. With strong, memorable melodies, expert-level production, dynamic and compelling vocals, and relatable songwriting, for a modern/alt-rock fan there’s so much to like about On The Run. We’d love to hear a full-length album from this group – with their set of skills and the music that has resulted from them, their potential is nearly palpable, and the sky is the limit.

BELOW:  Listen to On The Run and connect with their website and social media platforms. Please support TWOFEW by visiting them online, and playing, downloading, and/or purchasing their music, or attending a live show! And, as always, thank you for supporting real music!

Listen to ON THE RUN by TWOFEW: