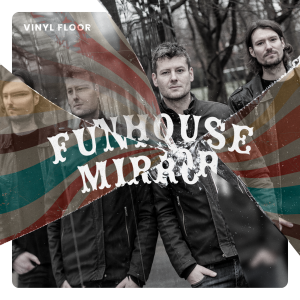 The brainchild of two Danish brothers, Charlie and Daniel Pedersen, Vinyl Floor is a Copenhagen rock band who are preparing for the release of their fourth studio album: Funhouse Mirror. A radical departure from the raw, lo-fi production of their 2018 record Apogee, Funhouse Mirror is a bright, melodic listen that sees the brothers tip their cap to the British pop-rock of the Sixties, while still finding room to exhibit their edgier, alt-rock tendencies.

The album opens with Anything You Want, the uptempo track released as the project’s lead single. The song’s verses feature a clever 7/8 meter which echoes the uneasy tone of the lyrics… “When you wanna go somewhere / And you oughta be somewhere / But there’s trouble in the air / And nothing seems to be fair”. A nice chord turnaround propels the listener into the chorus, where a driving drumbeat serves as the springboard for a soaring vocal melody. A brilliant, two-part trumpet line counters the vocal, and the chorus is followed by a tasty, descending guitar phrase. The end of the song sees a surprising pivot into an ethereal 6/8 groove; a dreamy mix of sustained horns and chiming guitar arpeggios.

Pretty Predictable is a song that certainly doesn’t live up to its name. A dark, intelligent bassline picks out chord tones from an unorthodox progression and a wall of guitar fuzz saturates the ears. It’s some sort of mix between early Radiohead and 90’s grunge. After the second chorus, a Kashmir-like breakdown ensues, then progresses into an outro section where dreamy vocal stacks provide a light, psychedelic contrast to the track’s darker, harmonic ideas.

There are some softer piano-led tracks on the album, like the old-fashioned charmer Dear Apollon, and the introspective Between Lines Undone (which sounds like it could be a Magical Mystery Tour outtake). All of which showcase the band’s knack for melody and colorful chord changes – strengths that also run right through Charlie Pedersen’s solo discography. Funhouse Mirror is a genre-bending triumph from a band who soak up a wide variety of influences, yet bring a distinctly forward-looking approach to their music. We highly recommend you set your calendars for the September 16th release!

BELOW:  Listen to Funhouse Mirror and connect with their website and social media platforms. Please support Vinyl Floor by visiting them online, and playing, downloading, and/or purchasing their music, or attending a live show! And, as always, thank you for supporting real music!