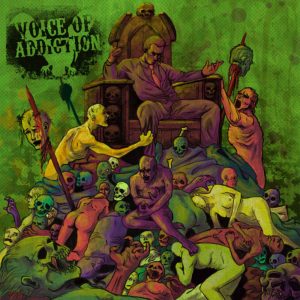 Tomele has even caught the eye of renowned music video director Bradley Pontecore of Madness Maker Films, who filmed the documentary Punk Band during a late 2016 VoA tour, which is currently scheduled for a 2018 release.

With an eclectic list of influences such as: Dinosaur Jr, Primus, Devo, Helmet, Violent Femmes, Woody Guthrie, The Pixies, Radiohead, Queens of the Stone Age, Sonic Youth, and countless others, Tomele and the revolving door that makes up the players in VoA have put together a respectable library of music, including 2011’s Reduce Reuse Resist, and 2013’s Modern Day Meltdown. Their most recent effort, The Lost Art Of Empathy, continues Tomele & VoA’s scorching and brazenly punk mission.

“Because I still believe, that with Unity, everything can be achieved, I will not be knocked down, together we will stand our ground.”

—Voice Of Addiction, from the song, Unity

With a touch of early 90’s The Offspring, the album opens with the fiery, pure-punk, Rustbelt; in which Tomele reminisces on his childhood growing up in Cleveland as only he can, with grit as sass…

“Oh Lord I know, I’m just wandering without a home…” 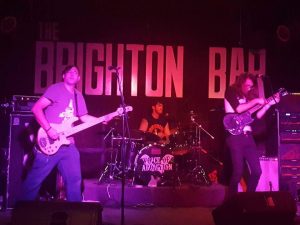 The rather Taoist, Dead By Dawn, is like a Starburst in a Hot Tamale wrapper as VoA rips and rages behind lyrics rich in consciousness-stirring observation…

Corporate Pariah opens with almost 40 seconds of an extra-melodic vocal/guitar-based intro, which gives away quickly to a ska-influenced jam—wrought, once again, with Johnny X’s brutally honest verbal lashing…

Our Favorite Track…
An artistic, free-radical number, the System of a Down-esque, Everything Must Go, is so much more than your basic punk song. Be sure to stick around for the 39-second guitar solo starting at 1:17.

“Collectively, we may have lost our sense of empathy, but the minute one individual puts him or herself in another person’s shoes, it can be restored.”

Capping off the album with the surprise acoustic number, Are We Even Human Anymore, Johnny X breaks the four-minute mark for only the second time on the album. With it’s reflective, grateful vibe which offers an account of the band’s 2016 tour, the track feels something like Green Day’s classic, Good Riddance.

The split personality-esque experience of Voice Of Addiction’s, The Lost Art Of Empathy, comes off immediately as bold and refreshing. As a whole, the production is clean and technically solid, while simultaneously being tastefully minimalist in its composition. (I.E., the guitars wale!) Combine these favorable attributes with Tomele’s articulate zest for truth and activism, and what you’re left with is a solid, substantive, punk-rock album. We certainly dig it.

BELOW, you can listen to Voice Of Addiction’s album, The Lost Art of Empathy, and connect with their website and social media platforms. Please support Voice Of Addiction by visiting them online, and playing, downloading, and/or purchasing their music. And, as always, thank you for supporting real music!

Listen to Voice Of Addiction’s album, The Lost Art of Empathy: