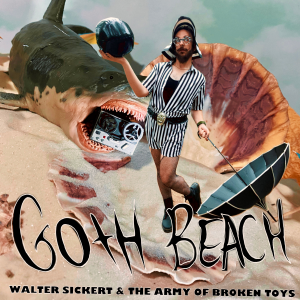 Walter Sickert & The Army of Broken Toys are an energetic eight-piece group from Boston. They employ an eclectic mix of instruments (viola, mandolin, and accordion – to name a few) to bring their punk songs to life. They have previously been named Boston Music’s ‘Live Artist of the Year’ and Improper Boston’s ‘Act to Follow’. With seven albums under their belt, they have proved themselves as a mainstay of the scene and now return with Goth Beach, their latest single.

The beach belongs to us now! – is the rowdy assertion at the root of this track. The band takes a pin to the whole ‘beautiful people’ / ‘beach party’ stereotype and declares the salty shore open for business to the freaks and misfits with their ‘nail polish’ and ‘black suits’. A driving, power-chord riff is the core that the song is built around. The drums hammer out the backbeat, and seem, appropriately, to imitate old school surf-rock. The song gets to the chorus nice and quickly; it’s full of punch, hooks, and tambourine and screams ‘summer anthem’!

This song is energetic and fun. A demented viola gives the song a sour twist, and Sickerts’s grungy, chanting vocal makes humorous references to anti-mainstream icons like Robert Smith and Siouxsie Sioux. Goth Beach is a sure-fire party starter and should be compulsory listening for beachgoers of any vibe, shape, or style!

BELOW:  Listen to Goth Beachand connect with their website and social media platforms. Please support Walter Sickert & the Army of Broken Toys by visiting them online, and playing, downloading, and/or purchasing their music, or attending a live show! And, as always, thank you for supporting real music!

Listen to GOTH BEACH by WALTER SICKERT & THE ARMY OF BROKEN TOYS:

Share WALTER SICKERT & THE ARMY OF BROKEN TOYS with your people: