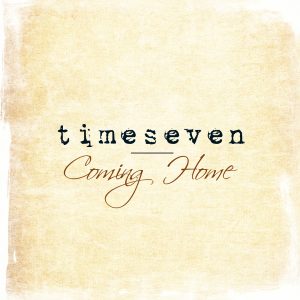 Below, you can read our interview with William Hayden of Timeseven, and listen to his album, Coming Home. Check out our full music review of Coming Home, HERE.

Q:  Your dad was a military man which caused you to travel a lot as kid. What branch was he in? What parts of the world did you see during this period of time?
A:  My father was in the Navy so we moved around a lot when I was growing up. We lived in Monterey, Alameda, and Fort Ord, California, Maryland, Virginia and New Jersey by the time I was 13 years old. It was hard to leave my friends and make new ones, but I think it taught me how to adapt to new places and situations.

Q:  Eventually your family settled-down in Covington, IN. Tell us how Covington has inspired your craft. In particular, tell us about your high school band, “Horizon”:  What kind of music was it? What was your role?

A:  When I was 13, my parents divorced and I lived with my mother, brother and sister in southern Maryland for a couple of years. When my father retired, my brother and I moved with him to Covington, Indiana where both of my parents are from. I have a lot of fond memories of that time in my life, playing in the garage band we called “Horizon”. (see photo at left) We were all good friends and had a great time rehearsing and playing together. Back then in the 70’s, we were influenced by the current top 40 music. We also played original songs written by our lead singer and keyboardist Phil, who is a talented singer/songwriter and the first person I knew who wrote his own music. He studied at Butler and Berklee College of Music and toured for many years after graduating college. Alan was our drummer and sound person. He now owns a successful recording studio and sound production company in Covington. Margo and Elise were the female singers who added a lot to the band with their beautiful vocals. I was the lead and rhythm guitar player and provided occasional comic relief.

Q:  Can you tell us about the first moment you picked up a guitar?
A:  I’ve been infatuated with the guitar as long as I can remember. I had uncles on both sides of the family who played guitar when the family got together. I was only six years old at the time, but one night my Uncle Beryl let me hold his guitar. It was an old Gibson archtop acoustic and it felt big in my small hands. When I was old enough he taught me some chords and my first songs on the guitar. My other uncle John played a Stratocaster electric guitar through a Fender Deluxe Reverb and I loved the sound. He taught me several old classic country songs that I still play today. I was fortunate to have those very diverse musical influences at such an early age, and I owe a lot to my uncles for taking an interest in teaching me.

Q:  What was your first guitar? Do you still have/play it?
A:  My first guitar was a sunburst Harmony Stella acoustic guitar that my mother bought for me for Christmas when I was 9 years old. She put a big red bow on top and hid it under my bed. I’ll never forget how I felt when I first saw it. I wanted a guitar for a long time, so I was thrilled! That was the guitar I learned my first songs on. I have it hanging on my studio wall to remind me of how my Mother loved and invested in me. My first really nice guitar was a Gretsch Chet Atkins Country Gentleman that my brother-in-law Dwight owned. I used to pick it up and play it whenever I visited his house. It was the same model that George Harrison played with the Beatles. I guess he could see how much I loved the guitar because one day he handed it to me and said I could take it home. That was the guitar I played in several bands, and I’ll always be grateful to him for showing me what generosity looks like.

Q:  You’re a solo musician. Was that a conscious choice to no longer be in a band, or was it simply a matter of circumstance?
A:  Although I’ve played in a few bands over the years, I consider myself more of a songwriter and producer than a performer. Songwriting and producing music is very different than performing. Writing requires a lot of time to myself as I reflect and focus on the writing process. I loved playing in a band and hopefully I’ll get a chance to do that again some day.

Q:  You latest work, the album, Coming Home, is a follow-up to the previous projects which include 2010’s, This Road (album), and 2014’s, This Is Our Life (single). Tell us how each of these are connected—and how they differ.
A:  My first album, This Road, was an autobiographical album about my life’s journey and search for meaning and purpose in life. The road I’ve been on has had its share of twists and turns and I’ve seen some beautiful things along the way, as well as some ugly storms. My latest album, Coming Home is about coming full circle in the journey while rediscovering the way back home. As the German theologian and philosopher, Meister Eckhart said, “God is at home, it’s we who have gone out for a walk.”

The single, This is Our Life, is a departure from my previous albums. It was inspired by a poem my son Hunter wrote and we worked together to turn it into a song. I was thrilled to have Dove Award winner Christa Wells perform the vocals and keyboard for the song. Lead guitarist, cellist and songwriter Matt Slocum of the band Sixpence None the Richer played a beautiful cello part for the song. Russ Long, a well known Nashville producer and studio engineer performed the final mixes. Nashville legend and Grammy-winning engineer Hank Williams, from Mastermix Studios, completed the final mastering. I was thrilled to have the opportunity to work with world class musicians, producers and engineers on this project, but most of all, it was an honor to write the song with my son.

Q:  How long did “Coming Home” take to record?
A:  After releasing my first album in 2010, I felt I still had some things to say. Many of the songs on the Coming Home album just poured out of me. I wrote some songs in a few minutes while others took over a year to finish. Although most of the guitar tracks were recorded in my studio in Raleigh, NC, many studios all over the country were used to record the album. The entire album took four years complete, but over 50 years of life experiences and influences were invested in the project.

Q:  Perhaps in some unspecified amount of time, your musical career explodes in the best of ways…what does that look like for you?
A:  When it comes to creativity, success is a difficult thing to measure or quantify. Although I’ve been fortunate to have my songs played on radio stations all over the world, my goal is not to become famous or wealthy through my music. My hope is that my songs will touch people and speak to them in a very personal way. There is comfort in knowing that others have experienced the same feelings of loss, heartache, joy, doubt and have survived to tell about it. After I released my first album, This Road, a woman I had never met contacted me to say she had just lost her husband and many of my songs really spoke to her. Another woman told me that her sister had lost her son in a car accident and that one of my songs helped her to grieve. If my songs can speak to people in a small way, point them to our creator, and remind them that we are not alone traveling on this road, then my music will have accomplished its purpose.

Q:  You get to collaborate with anyone of your choosing. Who is it?
A:  So many artists come to mind, but I’d probably have to say Jackson Browne. I’ve always loved his musical style. His lyrics are meaningful and tell stories that I’ve always been able to relate to.

Q:  Your favorite song of all time?
A:  Wow! That’s a tough one. There are so many great songs! I guess if I can only pick one it would be James Taylor’s Fire and Rain because I’ve been able to relate to that song over the years.

Q:  What artist is your biggest musical influence? Why?
A:  Jim Croce was an early influence and I still listen to his music. His guitar arrangements were inspired and his lyrics tell stories that most everyone can relate to. Back in the 70’s I listened to his music constantly on my 8-track tape player in my car, then later a cassette tape, and then CD. Now I listen to the same album through an MP3 hookup in my car. I’ve gone through many cars and technologies over the years but his music has outlasted all of them.

Q:  What would you like fans to know about you that they’re most likely unaware of?
A:  Fans?! What fans? I have a very dry humor that many people don’t get and sometimes that includes my wife.

Q:  Any shout-outs you wanna make?
A:  Just a shout-out to my wife, Christa and my kids, Helen and Hunter. Thanks for all of your support and love!

Q:  Anything else you’d like to add?
A:  Thank you for letting me tell a small part of my story. You can read more about me and my music at my website: http://www.timesevenproductions.com/

Listen to Coming Home by Timeseven:

<< Go to our full music review of:  Coming Home by Timeseven