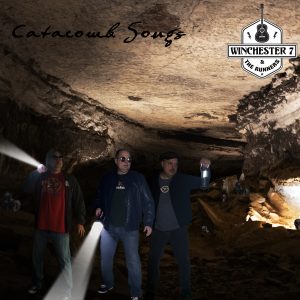 Atlanta-based group Winchester 7 & The Runners is breaking new ground with their mashup of genres. Defining themselves as indie ukulele rock, this eclectic and electric band – comprised of Phil Voorhees (bass), Jack Kane (drums), and Winchester 7 (vocals, ukulele) – is already making waves in their unique space. With their most popular single Beneath The Moon and Stars racking up nearly 13,000 streams on Spotify alone, the band is riding that momentum with a new album premiering this December. Catacomb Songs is a great introduction to the distinctive sound this group is bringing to the table.

Opening with Dead Celebrities and New Beginnings, the band’s sound is introduced as light and minimalistic, but as it builds the track grows in intensity and energy, especially thanks to the inclusion of the electric ukulele. The vocals take a front seat in this opening track, Winchester’s vocals adding warmth and fullness to the arrangement.

The Song That You sing is a surf-rock-meets-alt-rock hybrid, upping the energy and exploring the group’s comprehensive artistic range. Some interesting vocal harmonies and spacey synths almost push this track into the psychedelic range at times. This is followed by the more subdued Up On The Thirteenth Floor, a more uke-forward track with a strummy – if a bit somber – disposition, and a soulful, mournful ukulele solo at around the 1:20 mark that stands as a highlight.

We also love Riding High Again for its anthemic Americana tones, as well as Arcade Days for its growling vocals and techno-inspired synth patterns.

Officially closing out the album is Beneath the Moon and the Stars. This song leans in a classic rock direction, with a driving rhythm working in tandem with the ukulele riffs. It’s one of the heavier tracks on the album, but nonetheless, this track blends cohesively with the rest of the project, with its welcome energy and grittiness.

On this album you’ll find a couple of bonus tracks at its end, the first of which is a cover of a Jesus and Mary Chain track, Head On. Defined by a smooth and repetitive bassline and the band’s identifiable crunchy electric ukulele tone, this track’s particularly catchy melody lends itself well to the band’s sound, and the clear vocal production gives this an accessible pop feel (despite a few bluesy moments thrown in here and there). Not only does it stand out as one of the album’s most memorable moments, it again speaks to the band’s range of abilities, forging boldly into any combination of genres that appeals to their artistic sensibilities.

It’s easy to fall into predictability as a musician; clichés and genre tropes are nearly constant in the industry. Winchester 7 & The Runners is anything but predictable. Blending the ukulele into modern music is a challenge on its own, but incorporating a multitude of different genres and blending each of these components cohesively together is creativity and artistry on another level. On Catacomb Songs we find exactly that, tackled with fearlessness and thoughtful execution. Stream this truly unique and captivating album for yourself below.

Listen to CATACOMB SONGS by WINCHESTER 7 & THE RUNNERS: