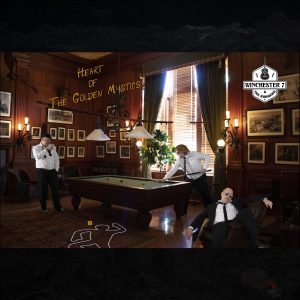 Below, you can read our interview with Winchester 7 & The Runners and listen to their album Heart of the Golden Mystics. Check out our full music review of their latest work here.

Q: Great to be hearing about new work coming from Winchester 7 & the Runners! Location-wise, the three of you are pretty spread out. How often do you get together to perform these days?

Winchester 7: Thank you very much! We’re excited for the release of our new EP, “Heart of the Golden Mystics”. We worked quite hard on it and I’m hoping that ethic, and some of the different things which we chose concerning approach, comes through for the listeners.

Now, as for performing…

Phil: Let’s just say that post-pandemic, not all has returned to what it once was.

Jack: We just renovated the studio! So, when we all end up in one place, it’s difficult to want to go to another.

Winchester 7: I don’t think that any of us really know how many shows we played together before it all. But, once in lock-down, we adapted. We started rehearsing and recording virtually, and after investing in all that, we started to have a new appreciation for recording process.

Jack: It’s not that we’re saying “we’ll never play another show” or anything!

Winchester 7: No! We’ll play out again.

Jack: We’ve never been ones for the same day-in, day-out sort of thing…

Winchester 7: But, we still get together to perform with one another quite frequently, if that’s what you mean.

Q: How did you get your start musically, and what originally brought the band together?

Jack: So, we’re all originally from the same place. We lived in a small…community.

Jack: You see, there were a lot of like-minded chaps. And we all shared similar perspectives on things.

Phil: Until we didn’t.

Jack: Right. So, La and I started forming…different opinions.

Phil: We had consciously shut ourselves off from the world, and then, we wanted to experience it once again. To visit places we hadn’t been.

Jack: So, we decided to pull a runner! But, ol’ Win here was sent after us.

Winchester 7: Well, everybody had a job to do. Mine was to discourage those who thought about leaving. It’s just, no one ever got as far as they did.

Jack: We thought that we’d left it well and good behind us…

Phil: When we decided to set up camp and play some music by the fire.

Winchester 7: I knew I was close, but when I heard drums and bass in the distance, I started to follow the sound. But, as I got closer…it was mesmerizing…there was just something about it. I couldn’t help but join in! I had my ukulele with me, so…

Jack: Well, it was as much a surprise to us as anyone. You can’t deny that Win’s got some talent and he’s not just playing “You are my Sunshine” on the thing!

Phil: So, we came to an agreement.

Jack: We decided to form a band!

Phil: And see the world!

Winchester 7: And while we each ended up calling different places “home”, it was that shared experience which first brought us together and our travels that helped to shape our sound.

Q: We reviewed “Catacomb Songs” last year and found it to be a genre-blending, boundary-pushing, and highly entertaining listen. Does your upcoming EP “Heart of the Golden Mystics” follow that same path?

Winchester 7: First, thank you. We’re really glad that you enjoyed it and hope that this one proves better still. Concerning direction? I like to think that we did. I know we set out to create something very different. It’s sort of a murder mystery, you know.

Q: How long did “Heart of the Golden Mystics” take to record?

Winchester 7: The better part of the year, actually

Jack: We only just finished it!

Phil: There were many, many takes.

Q: The electric ukulele is a rarely featured instrument, and rarer still in rock music. What led you to you deciding to incorporate that into the band’s sound?

Jack: He doesn’t know how to play the guitar!

Winchester 7: Yeah, but I can make a ukulele sound kind of like one. It’s different though. I think it helps give our work some color.

Q: We hear you may have a new music video coming out as well. Care to share any details with us?

Winchester 7: We do! We’ve got an animated visualizer ready for a cover that we did of New Order’s Bizarre Love Triangle. I really like how that one turned out.

But, we’re also in post-production on a video for “Your House of Cards”. It’s sort of the single.

Jack: A Jaguar full of birds, I hope.

Winchester 7: [laughs] Well, that’s certainly our hope, anyway. I think most artists, whether they profess to have no desire for the trappings of wealth or not, enjoy success when it finds them. It’s only whether or not they enjoy it within reasonable limits. If you don’t take the time to enjoy it, you’ll regret it when it’s either gone or doesn’t come so easily anymore.

So, we’re practical about the whole thing. We very much would like our musical careers to “explode” as it would mean that more people would have a chance to enjoy our work. It would also mean a better class of car, home, and a swimming pool! I live in Atlanta and a pool in the backyard would be nice, thank you.

Jack: It’s an impossible sort of question, isn’t it?

Jack: If I’m sticking with Macca, I’m going with Ram; but, to be honest, I may choose Exile on Main Street by the Stones.

Jack: You saved the tough ones for the end, of course. Band on the Run?

Winchester 7: How about “Heroes” by David Bowie?

For me, a favorite song is as impossible as a favorite breath. So, we shall go with “Live Forever” by Oasis. Why not?

Winchester 7: I know that I’ve spoken about my fondness for barbeque before, but it’s probably worth underscoring.

Jack: Win’s backyard grill has some pretty great burgers! As for me though, people probably are unaware of my penchant for pub quizzes.

Phil: Or fondness for alliteration. [laughs] Me? I collect stamps.

Jack: But, he’s never posted a thing! An anachronism, our kid.

Winchester 7: I’d be neglect if I didn’t give a big shout-out to our masterful mix engineer and, on this latest release, co-executive producer, Jon Paz.

Jack: Shout out to Pazzy and his assistant, keyboard extraordinaire, Norr Madagascar!

Phil: And to all of our fans for listening.

Winchester 7: We hope that you enjoy “Heart of the Golden Mystics”, streaming near you!

Jack: Though don’t let us stop you from buying a copy.

Phil: And stay tuned to our YouTube channel for a special “Making Of” documentary that will soon be released.

<< Go to our full music review of:  Heart of the Golden Mystics by Winchester 7 & the Runners

Listen to HEART OF THE GOLDEN MYSTICS by WINCHESTER 7 & THE RUNNERS: