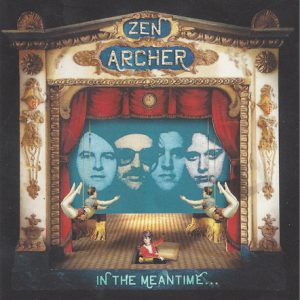 Texas-based prog-pop-rock group Zen Archer is by no means a newcomer to their genre. The group has been broadcasting their brand of rock ‘n roll for over three decades; a long and illustrious career (perhaps best described as “lost only to ZZ Top when fans voted for Best Rock Band in Houston back in the ’90s”). In that time they’ve shared the stage with a number of notable acts, including Bruce Hornsby, Roger McGuinn, Eddie Money, Bo Diddley, and Mark Farner.

The band is comprised of Dan Golvach (lead vocals, guitar), Randy Miller (lead vocals, bass), Steve Wilson (vocals, guitar), and Michael Grammar (drums), with appearances by Bill Berger, Marcus Evans, Christopher Cross, and Monte Montgomery. Their most recent release is an album titled In The Meantime, and this 18 track project puts their influence from the likes of The Beatles, Todd Rundgren, and Pink Floyd on clear display while showing that their 30 years of experience has allowed them to thoroughly create and define their own distinctive sound.

A combination of new material and rereleased favorites from the past, In The Meantime is a powerful blending of retro influence and modern execution. Exploding with driving energy, Hold on to Your Soul is a fiery opener, full of alt-rock tones and riff-based instrumentation; layers of perfectly blended sounds that play off one another without competing for your attention.  This is followed by Diamonds in the Rough, a wholly unique blend of ’60s pop and psychedelic tones with definitive progressive rock dissonance and segmentation.

The acoustic-based foundation of It’s a Crime puts the band’s artistic range on full display. This track is certainly lighter in composition and performance, but not any less subdued dynamically – it has a great build that increases in intensity as it progresses, but it never moves too far past an anthemic ballad sound. Rainbow is another great example of this – soulful and smoky vocals sitting front and center over a softened arrangement of booming percussion and spacey guitars.

Another high point of this album is the strong lyric writing. The lyrics could be easily overshadowed by the ridiculously high-quality music all over this project, but instead, the writing performs on an equally high level (if not even higher at times). Home offers us a particularly memorable performance on this front. The lyrics are uncomplicated and straightforward, but still manage to paint a particularly vivid picture of hope and comfort in just a few short lines:

Most Toys just radiates vibrance and good-time energy. With its relentlessly uptempo beat, catchy riffs in every layer of instrumentation, and a melody that feels familiar but never too predictable, it’s the pinnacle of all the things Zen Archer does well on this record. There’s great writing all across this album, but this track has the kind of hook that sticks with you long after the music has ended: “he who dies with the most toys wins“. The bouncy, upbeat feel juxtaposed with this standout and pensive line makes this the kind of song you can really dig into over and over.

Powerful and complex, but entirely digestible and brimming with energy. The latest music of Zen Archer is no doubt flavored by a complete assortment of genres, but at its core maintains a smooth, warm, classic rock center. In The Meantime has all the authenticity and soul of a ’70s rock record, but all the brilliant production choices and smart writing of a seasoned and modern band. There’s clear chemistry here that can only come from a balanced and experienced group sharing the same vision, and that element of oneness present on this record is what sets it above this rest. And their resulting work on In The Meantime is, simply put – modern rock of the absolute highest level.

BELOW:  Listen to In The Meantime… and connect with their website and social media platforms. Please support Zen Archer by visiting them online, and playing, downloading, and/or purchasing their music, or attending a live show! And, as always, thank you for supporting real music!

Listen to IN THE MEANTIME… by ZEN ARCHER: