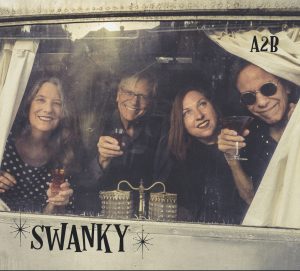 It’s been a while since we’ve heard from Americana foursome According to Bazooka. We last heard from the group in 2019 with the release of their third studio album The Devil’s in the Details, a project we found to be “uncommonly smooth. Island-esque. Anti-drama.” Now the California-based ensemble is back this year with their fourth full-length release.

The album opens with the smooth and saccharine Memories of Summer. Dreamy vocals and a perpetual warmth are the foundation of this track, creating a particularly vintage flavor that radiates sunniness from days gone by. The lyrical imagery is poignant and evocative, printing us  a polaroid of an old memory:

“California town on a warm summer night
Once again, I wait at the old stop light
I’m alone and tired and I’ve got too much to do
Someone on the street makes me think of you“

Fun energy abounds in the light and twangy Bakersfield. The shuffling beat and close vocal harmonies carry the classic (and true) tale of a road-weary musician on the way home.

I’ll Go Looking For you leans in a soft-rock direction, with plenty of layers of percussion driving the track, all the while making great use of rich, full vocal harmonies. The chimes add a welcome pop of brightness at their every appearance.

The simplistic and relaxed bluesy elements of Nothing Fancy suit the storyline to a tee. The duet between Urbino and Martucci is a fun lesson in sonic juxtaposition – the soft and sleek vocals from Martucci contrast wonderfully against the raspier, smokier timbre that Urbino possesses. Don’t sleep on the guitar solo at 1:20 as it’s the essence of the track boiled down to 15 seconds: straightforward, uncomplicated, but perfectly executed.

There’s a hint of funkiness beneath all the rock ‘n roll of Better Safe Than Sorry. This track perfectly suits Urbino’s classic-rock-style vocals, complete with plenty of crunchy guitar and organ tones. A theremin makes an appearance on this track, its sci-fi-esque sound a unique and memorable textural element. 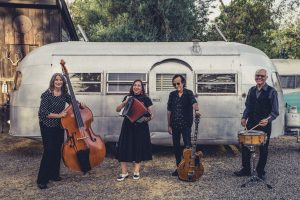 There’s pure artistry on display in All In Your Head. A beautiful accordion intro gives way to a haunting acoustic-led composition driven by double bass, with the vocals showcasing a melody with just the right balance of eeriness to sell the story. And the story is heavy – painting a dramatic picture of paranoia, fear, and self-doubt:

In short, it’s a beautiful, emotive example of the darker side of Americana.

According To Bazooka undoubtedly carries on their path of uncomplicated brilliance with Swanky. They walk the fine line between minimal production and developing a full sound, writing substantial songs and orchestrating arrangements around them that suit each track without ever falling into the traps of predictability. And any band who can so seamlessly integrate something as stately as an accordion into track after track without letting it overtake their sound should be held in high regard – it’s indicative of a masterful understanding of composition and production. This band effortlessly takes a range of influences and blends them into one seamless creation, where musical cohesion and excellence reign supreme at each and every measure.

BELOW:  Listen to Swanky and connect with their website and social media platforms. Please support According to Bazooka by visiting them online, and playing, downloading, and/or purchasing their music, or attending a live show! And, as always, thank you for supporting real music!

Listen to SWANKY by ACCORDING TO BAZOOKA: