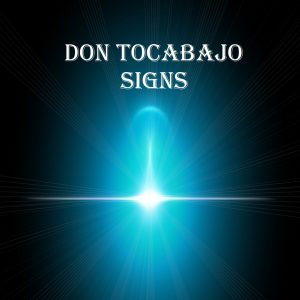 You may remember the instrumental work of German composer Don Tocabajo from our review of his previous release, Ad Gustum, a release we thoroughly enjoyed and found to be “Bold, expressive, and musically explosive“. We’re sure that you’ll be as happy as we are to know that Tocabajo has another release premiering this March, and his new EP SIGNS is everything we loved about his previous release, and then some – never afraid to push the boundary of expectation.

Like in his last project, every step of the process including composing, arranging, recording, mixing, and mastering were all completed solely by Tocabajo on SIGNS. Being a true one-man operation is no easy feat, but Tocabajo handles all of these tasks with apparent ease and skill – as to listen to his work is to feel as if you’re listening to the work of many masters of their crafts all at once. 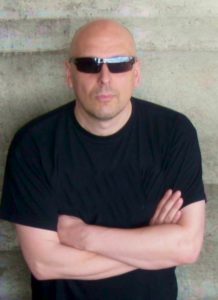 This EP opens with a track title Scared, and from its first notes, it’s apparent that this is Tocabajo working in a slightly different sonic space. The eastern-inspired opening tones give way to a supremely distorted and seriously heavy electric guitar riff. While his last project had occasional allusions to the metal genre, on this project we’re diving headfirst into it – and it’s working incredibly well here.  The eastern tones are a constant over the driving, imploring rhythm and intricate drums, an unlikely but wholly effective combination of styles – and we quickly find this unique mashup to be the base on which this EP is constructed on.

The EP’s title track Signs follow suit in a similar manner. The electric guitar riff that opens this track is familiar and melodic, but the song is quickly directed by a collection of world folk sounds – African drum rhythms, perhaps the twang of a sitar. This inclusion of more unusual percussive instruments over heavy electric guitars is a technique we saw on display in his previous album, but on this newest project, it positively shines as both an identifiable component of his compositions and an indicator of his knack for blending music that would seem impossible to bring together cohesively.

Demons are Knocking on My Door begins lighter, and lets the eastern flair that defines this album take the lead at first. This track has a bit more back-and-forth between the lighter, folkier tones and the heavier metal riffs, making for a captivating sonic juxtaposition of these very different styles.

We take a step back from the driving metal rhythms and settle into something with a little more swing in Fractal Life. The electric instruments turn the distortion down a notch here as well – they almost sound like a natural complement to the orchestral sounds of the strings that lead this track. The break at 1:54 is a particularly nice touch – it gives the ears a moment of respite, allowing for the simplicity of the folk instruments to command almost your entire attention – before slowly leading us back into the fray.

The album closes with Gracias Por, and it’s a great summation of everything this project has to offer. Layer upon layer of complex guitar and percussion tones, with a perfect apex layer of completely unexpected, nuanced, and somehow perfectly complementary eastern folk tones. Even at the conclusion of this album, it’s hard not to be in awe of how natural these two genres, practically from separate worlds themselves, work together in the hands of Tocabajo. The combination works every single time on this EP.

The panning effects on the introductory guitar in Tolerance grabs the listener’s ear immediately (listen to this one with headphones for the full effect). But we get a taste of a slightly different genre mash-up in this number – the melody laid over the top of the metal base is decidedly more western in composition and execution. This track has a great build across its length, and features a varying number of instruments, each playing a host of varying melodic parts – and then suddenly the song ends, and you’re thrown into immediate silence. This track feels truly cinematic from start to finish.

Any musician will tell you that it’s hard enough to show any level of mastery in any genre, even those closely related to one another. It’s another level of skill entirely to be able to understand many wildly different kinds of music all at once – and to know them so well to be able to bring them together under a single composition. Don Tocabajo‘s compositional skills are perhaps unmatched in the indie instrumental world, and in this work, he’s shown us that nothing is off-limits for him. For an absolute sonic journey through style combinations that you wouldn’t have imagined in even the most far-fetched reaches of your imagination, take a listen to SIGNS when it officially premieres on March 15th, and prepare to be mesmerized, track after track.

BELOW:  Listen to SIGNS and connect with his website and social media platforms. Please support Don Tocabajo by visiting him online, and playing, downloading, and/or purchasing his music, or attending a live show! And, as always, thank you for supporting real music!

Listen to SIGNS by DON TOCABAJO: