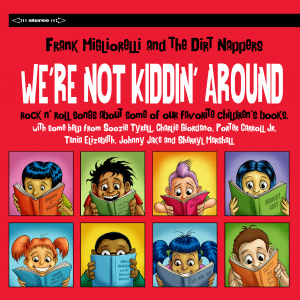 We’ve had the distinct pleasure of reviewing two previous works from the endlessly talented group that is Frank Migliorelli & The Dirt Nappers. Both The Things You Left Behind and Bass, Drums, Guitars & Organs were stellar records, the latter of which we found to be “Light and effervescent. Unassuming and substantive. Uncommonly skilled musicianship.”

This time around, Migliorelli is trying something a bit different.

“No one had anything to do when the pandemic hit. So I thought I’d call up a few friends and see if they wanted to make a rock n’ roll record- for kids.” – Frank Migliorelli

Migliorelli previously wrote children’s music for a living, writing for educational products and video games, and with the concept “every good book deserves a good song” in mind, the wheels for this project were set in motion. The songs themselves are all inspired by classic children’s books, including Flat Stanley, Harry the Dirty Dog, Where the Wild Things Are, and many others.

Yes, the album sounds that good. 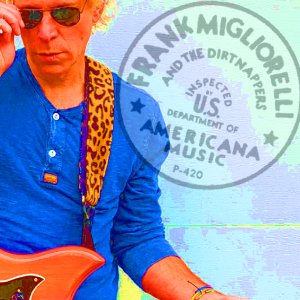 HERE’S WHAT WE DUG MOST…
It’s feel-good nostalgia from the album’s first moments. Spending the first few lines of the opening track reminding us all to hold on to our inner child, we’re quickly transported to the land of Where The Wild Things Are. Unabashedly fun, uptempo, and lighthearted – it’s as if Petty wrote a children’s song.Another instantly recognizable classic makes an appearance in the second track, Hey, Mike Mulligan! This is essential light classic rock, complete with tight vocal harmonies, a ripping organ solo, and an absolute earworm of a hook.

My Monkey Got Lost is pure funk. The lead vocals on this track are smooth and soulful, accompanied by a punchy bassline. The vocal harmonies are subtle and blended, but the breakout vocal riffs interspersed throughout the track are a fun addition, both for texture and for character.

A more acoustic Americana sound emerges in Harry the Dirty Dog. Light and relaxed with an emphasis on acoustic, this track does a great job of showcasing the album’s use of simplicity. It’s a key component in kid’s music, and here Migliorelli and company have managed to create music with depth that stays easily digestible. Take the chorus lyrics, for example:

“He’s a happy little puppy, when he’s muddy as a hog
You’ll never recognize him, he’s
Harry the Dirty Dog.“

Straightforward and crystal clear, for sure. But this is brought to you by an exceedingly soulful lead vocal, with a subtle little electric guitar lick underneath, a perfectly crisp acoustic, and then later, a guitar solo fit for your favorite rock album. Putting all of these components together results in music that is incredibly rich, but these simple, classic stories that inspired the songs keep everything grounded and in kids’ music territory.

Go Dog Go was one of my favorite childhood books to read, so you can imagine my complete delight to find the absolute perfect soundtrack to the story closing out this album. It’s an uptempo bluesy shuffle, an excellent complement to the section of the story they’ve highlighted the most – the big dog party in the tree.

And that’s one of the highlights of this record. For their adult listeners, these songs are transportive – if these stories were a part of your childhood, these songs take you right back there instantly.

This Frank Migliorelli & The Dirt Nappers project may have resulted in the best kid’s album ever written. Wholesome, authentic Americana/rock that doesn’t pander or rely on cliche, no; nothing but quality, classic stories, and quality, classic music. It’s one part nostalgia, one part pure technical musical skill, and one part entertainment – for kids ages 1 to 101. Get We’re Not Kiddin’ Around into the hands of enough children, and the futures of both the musical and literary worlds are going to look a whole lot brighter.

Know a kid who ought to hear this music? Take them to http://www.musickideos.com/ for even more from the band, featuring activities, music videos, and resources for kids and parents to explore.

BELOW:  Listen to We’re Not Kiddin’ Around and connect with their website and social media platforms. Please support Frank Migliorelli & The Dirt Nappers by visiting them online, and playing, downloading, and/or purchasing their music, or attending a live show! And, as always, thank you for supporting real music!

Listen to WE’RE NOT KIDDIN’ AROUND by FRANK MIGLIORELLI & THE DIRT NAPPERS:

Share FRANK MIGLIORELLI & THE DIRT NAPPERS with your people: