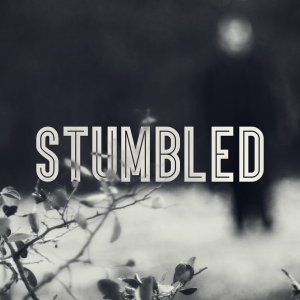 You may remember Daniel Goldberg from our interview and music review for his first single, Let’s Dance, back in August. Truth be told, it took exactly 24 seconds of listening to that track for me to know that The Ark of Music wanted him on-board.

Now, just a few months later, Goldberg and company are at it again with their latest creation, Stumbled. Tricked-out with producer-multi-instrumentalist, and musical phenom Nadir Baaset’s bluesy guitar riffs, and once again including Jonny Trumpet’s signature brass infusion, the end-result is a smooth flight into yet another electric-soul funkmosphere. (Sometimes you gotta make up words when the music is this cool…dig?)

This time around, however, there’s a bit more as Goldberg is telling a story that even he admits is a bit dark—though honest. Through the song’s lyrical flow, and the video’s black and white imagery, a hard truth surfaces:

Sometimes you have to cut your losses, and walk away.

In the end analysis, the song’s infectious groove, and the video’s artistic presence, result in a piece of work that could just as easily make your “sit back and ponder” playlist as well as your “weekend boogie” list. Check it out for yourself below…

“…but now I know,
It’s never perfect anyhow,
It’s better being here and now,
You can always work it out,
As long as you don’t turn into a thunder cloud,
Clear thoughts hit harder than being loud,
There’s nothing wrong with being proud,
But arrogance will take you down,
Are you listening to the words as they’re coming out,
Don’t just sit there and pout,
It’s not something you can do nothing about,
I’m just saying be exactly who you are,
Being anyone else won’t get you far,
Don’t need to be a fraud,
Oh I’m so done talking to you just try to hear the emotion in the guitar.”

Whose lovechild…?
The underappreciated musical stylings of blues legend Junior Kimbrough, with a dash of JJ Grey’s band, Mofro.

Help fund Goldberg’s music:  Currently, Daniel Goldberg is running a crowdfunding campaign to fund the independent promotion of his music (psssst…he’s working on an album!). Learn more about his goals, and how to contribute, HERE.

BELOW, you can watch & listen to Goldberg’s new single, Stumbled, check out our interview with him, connect with his website, social media, download & streaming platforms, and find his contact information. Please support Goldberg by visiting him online, and playing, downloading, and/or purchasing his music. And, as always, thank you for supporting real music!

Listen to our artist interview with Goldberg: