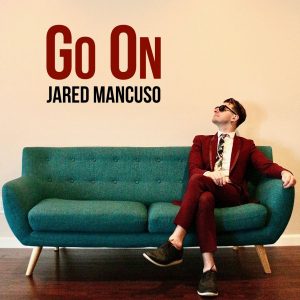 When we last left alt-rocker Jared Mancuso, he was coming off the release of his album Hype! (2018), which we found to be an “album to make rock-expats come’on home and love rock again“. Since then he’s moved to Phoenix, AZ, and is working out of the studio he started up, EP Studios. He’s also back to creating music – his most recent single titled Go On officially releases on January 26th, and it’s a slight adjustment in style for him – a nostalgic nod to alt-rock of decades gone by, executed in an unquestionably catchy and familiar way.

Mancuso tells us that in his youth, he spent a lot of time listening to the likes of Weezer and Everclear, and that this single draws on both the more polished sounds of those artists, combined with references to early 2000’s pop-punk artists like All American Rejects and Cartel. In Go On, these influences are unquestionably present, if not practically defining. Mancuso has done a phenomenal job of blending these other brands of throwback alt-rock with his own style in a way that definitely evokes thoughts of other artists (we’re getting a Blink 182 vibe), but doesn’t ever feel like a carbon copy.

When writing something that brings other successful artists to mind so easily, it’s usually because the song is of the high quality needed to stand alongside them. Indeed, Go On feels like it would have been a hit in 2003, charting right next to Ocean Avenue and Move Along. To add to that point, the main melody here is practically infectious, and we think you’ll find the last line of the chorus bouncing around in your head long after the track has finished playing. The subject matter is endlessly relatable – who doesn’t have a “one that got away” story? Mancuso says it best in the bridge (which also does a great job of showing off his voice, his tone feels perfectly suited to this style of music):

Somehow, we can say all that about this song and still have not touched on the instrumentation itself, but that’s not at all because it’s any less impressive than the rest of the song – there’s just so much to write about here. Go On is chock full of classic pop-punk distortion, a perfectly executed but simple layer of harmony at critical points in the track, and some intermittent hand-clap-breaks that push this track just inside pop territory and give it cross-genre appeal. It feels incredibly well thought out, which only serves to give both the track and artist even more credibility. 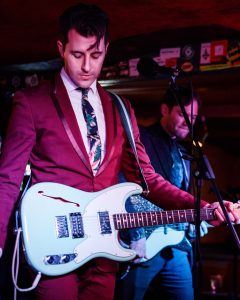 Perhaps it’s a bit selfish on our end, but we’d hope that Go On is a preview of a full album of songs in this style from Jared Mancuso, simply because he’s doing it so incredibly well. This single is executed flawlessly on every level and accomplishes exactly what it set out to do. If you’re a fan of any of the bands that we’ve mentioned here, do yourself a favor and check out Go On when it premieres on January 26th – we expect it’ll quickly end up on that 2000’s throwback playlist we know you still listen to.

BELOW:  Listen to Go On by Jared Mancuso and connect with his website and social media platforms. Please support him by visiting him online, and playing, downloading, and/or purchasing his music, or attending a live show! And, as always, thank you for supporting real music!

Listen to GO ON by JARED MANCUSO: