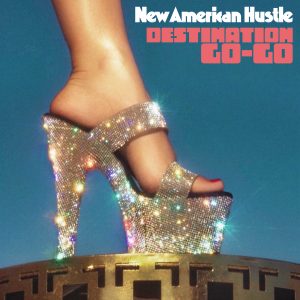 Guess who’s back, back again… it’s our favorite virtual indie rockers New American Hustle, with yet another fabulous release. The mainstay of this band is California-based artist and producer Ian Smith, who’s mastered the technique of connecting with musicians around the globe and working remotely to release music under one name. On the last full-length release we reviewed from New American Hustle, Bury My Black Heart, we found it to be a “well-crafted composition of grunge, hard rock, and metal tones, tied together by intricate and complex performances.” In this most recent release, Smith shows off his musical range and takes us in a completely different direction with a totally different cast of characters.

“Growing up with the music of the nineties was like surfing the last great wave of the twentieth century. Before cellphones and the internet revolutionized pop culture, bands still truly experimented and pushed musical boundaries until nostalgia and irony started to set in”. – Ian Smith

Destination Go-Go is a tribute to the ’90s trip-hop & alternative scene in every way. This time around, Smith provides us some of the loops and production f0r the album and has involved quite a number of other musicians to take up the rest: Nate Bridges (guitar, bass, mixing/mastering), Lola Shuze (loops, spoken word vocals), Aylene, (rap vocals), Messy MC (rap vocals), MC Bristol (rap vocals), Cory Friesenhan (vocals), Juicy Rohan  (vocals), and Lolita Hendrix (vocals). With so many vocalists, one might expect a too-many-cooks-in-the-kitchen situation on the album, but that’s hardly the case. Smith deftly uses his talents on Destination Go-Go to fully integrate each of these musicians into the overall project in a way that consistently feels cohesive, as well as a well-executed tribute to the artists that inspired the album. 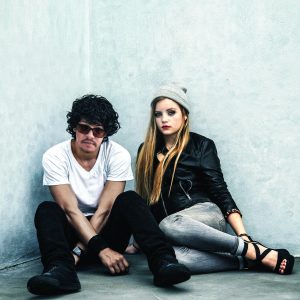 The album opens with the title track Destination Go-Go, and right away it’s evident this is a new direction for the band. This track is purely beachy and laid-back in attitude, with perhaps hints of reggae influence in some sections while clearly moving in a hip-hop direction in others. It’s a combination we haven’t seen a lot of, and it works incredibly well in this song. That said, in the electric guitar riffs that punctuate this track at times you can still hear echoes of the tones and phrasings that Smith seems to prefer – perhaps our only indicator that this was released by the same band. It’s truly not an easy feat to release good music in multiple genres, but New American Hustle doesn’t seem to have any problems with that.

Rum & Coca answers any questions we might have had about possible reggae influence – that answer is a resounding yes. And yet, we also get flashes of pop hooks, electric guitars, and even some heavy synth parts thrown in for good measure. But it’s less of a sampler platter of genres and more like a jigsaw puzzle, as each section seems to fit seamlessly with the sections around it.

We take a deeper dive into the complex production that we’ve come to know and love New American Hustle for in Aphrodite’s Sandals. The entire track is intricate and involved, bringing layers of varying synths, percussion, vocals, guitars, and bass – with each instrument evolving in its own right across the track – together into a cohesive, collective sound. It manages to feel both intentional and experimental.

Just like on Bury My Black Heart, the band has included a 10+ minute monster of a track on Destination Go-Go as well. I’ll Be Fucking Drunk Today clocks in at an impressive 10:12, and in that time we’re treated to a wide variety of instrumentation and musical concepts. In tracks like these, you can almost visualize the way Smith builds the track, with each section uniquely its own yet also a part of the bigger picture – some sharp, some smooth, some pounding with rhythm, some spacey and melodic. It’s complex and borders on unpredictable, but it’s never chaotic. Rather, it’s a show of skill and musical comprehension from both the musicians performing on this track and the production behind it.

The sky is the limit for Ian Smith – his production skills have incredible range and the two most recent releases from New American Hustle unquestionably prove it. Destination Go-Go is truly for the ultimate fan of ’90s culture with an edge. It’s a fantastic tribute to the artists that inspired the album, but this project stands on its own as something truly unique and inspired.

BELOW:  Check out our full artist interview with New American Hustle, listen to Destination Go-Go, and connect with their website and social media platforms, watch their music video, and find their booking & contact information. Please support New American Hustle by visiting them online, and playing, downloading, and/or purchasing their music, or attending a live show! And, as always, thank you for supporting real music!

Check out our interview with NEW AMERICAN HUSTLE: