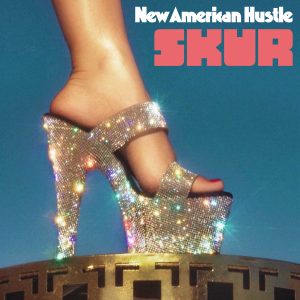 They’re at it again, folks – just over two weeks after the release of their last project – a hard rock/grunge record titled Bury My Black Heart, New American Hustle is already back at it with new music. This time they’re coming at us from a completely different direction – Skur takes a distinct turn away from the sounds of their last record and directs us into the world of electronic & hip hop.

Our favorite “virtual band” – that is, those working on each album collaborate only online – was founded by Ian Smith of Merced, CA, who handles the loops and production. This latest release also features Nate Bridges of Black Market on mixing/mastering efforts, as well as Aylene and Messy MC on vocals. If you read our review of New American Hustle’s previous release, you’ll likely be surprised by the tone shift on this new album – they’ve gone from grungy hard-rock to experimental electronic sounds in a matter of weeks – it’s a seriously impressive range. 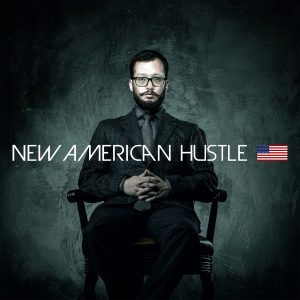 Listening through the album, it’s clear that while Skurr is a clear departure from the grungy sounds of Bury My Black Heart, some familiarity can be detected that ties the works together in subtle ways. The occasional drum beat, synth tone, or bass rhythm seems to echo the previous release, letting us know that these are in both albums by the same band. And the title track Skurr pays a bit more direct homage to their previous release with a heavy, grungy intro.

Show Isn’t Over showcases a really great juxtaposition between the smooth, sultry vocals against the cutting, raspy rap, complete with instrumentation to match.

Mad Little Girl has a loose, spacey feel, and the slow build over the first minute really lets the listener sit in the openness of the track. There’s a particularly retro feel here in regards to the synth tones, but it also dabbles in some experimental rhythms at times, which keeps it modern. Unconventionally, the bassline in this track is particularly catchy, even as it evolves across different sections of the song.

Flexxx For You is our favorite foray into this genre from New American Hustle. It’s got a killer, catchy melodic hook and equally as impressive vocals, over a consistently interesting collection of spacey and electric synths and sounds. The breaks are in all the right places to keep things interesting without totally stripping the track of any structure, and the repetitive bassline keeps things familiar. This one has some of that “star quality” that just makes a track feel like a hit.

A band of many colors, New American Hustle never disappoints, no matter the direction they choose to go in. Skur is a vibrant, trippy collection of experimental electronic tunes that isn’t afraid to push boundaries but is still grounded in music and solid production – despite the differences in style, these are the underlying qualities we’ve come to expect from the band. Continuing on his musically prolific path, Ian Smith has made mention of at least two more albums this year that will continue to explore this sound and style. We can’t wait to see where he takes us next.

BELOW:  Listen to their album Skur and connect with their website and social media platforms. Please support New American Hustle by visiting them online, and playing, downloading, and/or purchasing their music, or attending a live show! And, as always, thank you for supporting real music!