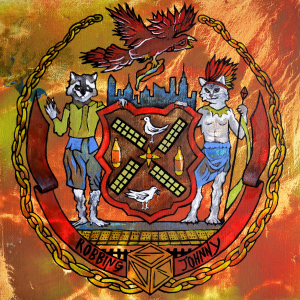 At the core of the group are its founders Pat Robinson (vocals, lyrics), and John Murrell (keys, guitar, vocals). Rounding out the group are Evan Harris (guitar), John MaHoney (bass), and Jordan Brooks (drums, percussion).

Previous work includes 2015’s Cynical Son EP, as well as 2016’s Salamander Cool (single); both prerequisites of their latest project, Cold March, an album which tells the tale of a newcomer’s woes in New York City.

“Pat and John met spectating a knife throwing contest at a festival. Bards from different lands, they banded together and traveled from town to town sharing poem and song. Thus was born Robbing Johnny. Along the way, they met a shaman named Evan who showed them how to harness blue fire. One fine day, these men came upon a pair of wayfarers. Mahoney and Brooks were their names. In their souls, they contained a wizardry known as groove. Thus, maketh the rock and roll.”

Opening with an elegantly gentle bit of finger-picking, don’t get too comfortable and don’t be fooled into thinking you already know who these guys are. It takes Sylvia about 1:37 to blow the doors off with something reminiscent of jam-banders, O.A.R. 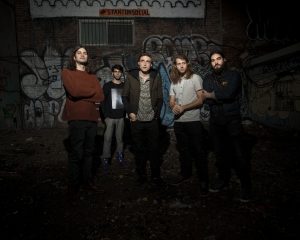 Bring forth the hip-hop. The album’s title track, Cold March, is an anthemic ode to the harsh realities that can accompany newly acquired life in The Big Apple. The track is wildly unpredictable as it alternates between Robinson’s worthwhile flow (reminding me a bit of Citizen Cope), and a raucous jam-style refrain. (BTW, be sure to check out the a-cappella reprise at the end of the album.)

Red Bird In The City: Imagine if Elton John and Eminem finally made a song together.

Our Favorite Track:
Bodega Vegan combines a lyrical flow—which at this point in the album can officially be labeled as skilled—with an all-out rock melee, complete with roaring guitar solo (at 2:44), intriguing lyrics, and bold harmonies. The song is wildly creative.

So, by now, you think you’ve got a handle on RJ’s style. Enter the southern rock-n-roll of Highbridge Park. (Think: Lynyrd Skynyrd, Alabama, & The Allman Brothers Band.) It’s just a damn lovely song.

“Momma said when I was young, don’t do right and don’t do wrong
Just sing my own damn song”

—Robbing Johnny, Worms In The Soil

Wildly and profoundly unique; Robbing Johnny’s latest album, Cold March, is a collection of songs that are somehow simultaneously charismatic—and—utterly reckless—all at once. It’s like putting chocolate chips in your red wine. One minute it’s grimy, urban hip-hop, the next it’s mandolin and a lovely bit of vocal harmony. (I’m not kidding.) It’s new. It’s fresh. And, every song creates anticipation for the next. These guys are a textbook example of the immeasurable potential that exists within the art of independent music—where imagination, skill, and love for one’s craft are allowed to create—free of rules, guidelines, contract stipulations, label demands, or most aggravatingly of all: genres. Damn. Here’s to music.

Whose lovechild…?
Sublime meets Motherfunkship, with a twist of O.A.R. and Citizen Cope …

BELOW:  Listen to Robbing Johnny’s album, Cold March, and connect with their website and social media platforms. Please support Robbing Johnny by visiting them online, and playing, downloading, and/or purchasing their music. And, as always, thank you for supporting real music!