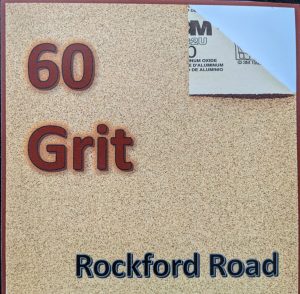 Below, you can read our interview with Jim Davidson of Rockford Road, and listen to their most recent work on their album 60 Grit. Check out our review of their singles Irish Grass here and Doin’ Nuthin’ here.

Q: Great to be speaking with you, Jim! You tell us Rockford Road is based in Richmond, VA. What’s the area’s original music scene like?

A: I think people outside of Richmond would be surprised how active this city has been for original music. It has spawned bands like Dave Matthews, Carbon Leaf, Cracker, Gwar, D’Angelo. With VCU being a popular art school we have a yearly influx of artists, music, and otherwise. In some sections of Richmond, it’s like Soho was in New York City in the ’60s and ’70s.

Q: Your music has an incredibly authentic, true classic rock sound to it. Has that always been your preferred genre?

A: I guess you can not help being imprinted with the music you grew up listening to on the radio, it becomes your life’s soundtrack. Music was so diverse as I grew up, The Beatles to Motown, Springsteen to Disco, The Eagles to Led Zeppelin. Artists had the opportunity to explore and be individualistic. Someone once said the ’50s were the birth of Rock and Roll, and if that’s true, then the ’60s were primary and high school and the 70’s were college. I’m eternally grateful to have been there for their graduation ceremonies.

Q: How long have you yourself been performing? Are you classically trained or self-taught (or somewhere in between)?

A: My journey as a drummer has had a circuitous route. I played some in high school but gave it up for years as a baseball career, marriage, a child and my company took precedence. I had not sat at a drum kit in 20+ years before I started playing again. I have had little training, I find rudiments difficult and prefer free form practice. Fortunately, I have an ear for the groove in a song and seem to find the right fills and accents once the band starts playing. Like Ringo once said – ” I never know what I’ll play until the boys start.”

Q: When and how did Rockford Road get started? How quickly did you arrive at your current lineup of musicians?

A: Rockford Road started with me buying a drum stool 5-6 years ago…really. I was starting to play again and answered an ad for a drum stool with a back, the seller was a musician and wanted to jam. He brought along Bob Mahan (the band’s current lead singer) and we played. The guy sucked, but Bob was great and we realized we had a chemistry and similar likes and goals, so we formed our own band. Looking for musicians to play only original music was more difficult than we thought, most were apprehensive since they were used to playing covers. Eventually, we found a terrific bass player (Tom Wisneski) and he brought in our other guitar player ( Mike Lara.) Really good musicians and nice guys, practice is always a hoot!

Q: Prior to your new album “60 Grit”, the band released “Road to Sabattis” back in 2018. Do you feel your sound has evolved across both projects? Any plans for more releases in the future?

A: Yes, that was a great album. “Sabattis” was where we found our footing as a band, but more importantly as songwriters. Some of those songs were just damn terrific! If we had known how good it was we would have promoted it more. I’m gratified there has been a continued evolution as a band and as songwriters on “60 Grit.” We grew in confidence in our storytelling and our recording process. We never wanted it too slick, the music seems to lose its essence, its soul, when that happens. Believe it or not, we already have our next album written, we never seem to be short on material. We hope to work on it during the year and record and release it in 2022. 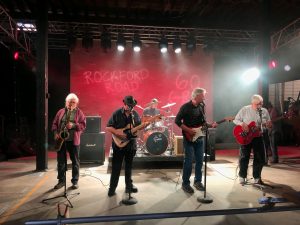 Q: How long did “60 Grit” take to record? What was that process like for you?

A: The basic tracks for “60 Grit” were recorded in a month or so. The additional singing, instruments, and mixing took a while because of the pandemic, so it was almost a year in the making. We have found a great engineer and producer in John Morand of Sound of Music Studios. He has original ideas, a positive attitude, and tremendous patience, so the process is always upbeat and exciting. The process in the studio can be one of the most interesting parts of making an album because occasionally some songs morph into something different and better.

Q: Who does the majority of the band’s songwriting? Is it a group effort?

A: Perhaps the most gratifying part of being in the band has been my collaboration process with Bob Mahan as a songwriting team. Bob was the primary writer until he allowed me to write some lyrics so long as he wrote the music. It seems it really changed us as a band. Songs became more complex and Bob really became engaged in writing music to someone else’s words. It was sort of a serendipitous event. To find I have such an aptitude late in life was surprising, but it would not have happened if not for Bob, and the band’s encouragement. Mike Lara has brought in a few songs of his own that we have developed. It’s always a band process, which is part of the fun.

Q: On that same note, you tell us that as a band your goal is to share life experiences and tell life stories. What kinds of moments inspire your songs?

A: Everything. That’s it in essence. Life’s events, both large and small can inspire interesting tales. Everyone has lived a novel, it’s finding the kernel’s of truth and relatable qualities that can make a good story. The best songs have a universality to them, but they can’t be generic. We all have loved and lost or gone through tough times, but telling it in your words is what you have to do, it’s the topic that’s relatable, but your point of view makes it unique.

Q: Which other artists do you consider to be your greatest influences?

A: John Prine. John should have been America’s poet laureate. He had the ability to tackle difficult topics and life’s absurdities, both with equal analysis, and all the time with a glint in his eye. He could make you laugh and cry during the same song, and then break your heart and mend it on the next. Never maudlin, always clever, full of wit and humor, and an almost telepathic ability to know what you’re thinking. I was deeply saddened by his passing last year. Many of the songs on “60 Grit” were written in honor of John, and if I captured 1/100 of his ability I am pleased.

Q: Are there any plans for live performances in the coming months in support of “60 Grit”? Where should fans look for you next?

A: Probably not, we’ll focus on making our next album. We can be followed on our website and Facebook. We’ll be adding some music videos and other things during the year.

Q: If you could offer one piece of advice to anyone looking to start an original band of their own, what would it be?

A: Define your role in the band. If you want to sing, write lyrics and/or music be sure you know how, and if you are lacking in some element find a bandmate that can take that role. If you’re a singer or musician but can’t write, partner with someone that can, if you can’t write lyrics, but can make music, find a lyricist. It’s more complicated than people think, even for musicians, that’s why so many bands break up. Not every musician wants to play original music either, it’s a different skill set.

A: Probably selling our original songs or perhaps getting a following on social media and music blogs. The music world is an anomalous place from when I grew up, it’s a different ballgame with so many players. We are very proud of our music and would like to get it in as many ears as possible, however that may happen.

A: Bruce Springsteen. Our stories and music are not too far apart and he has been one of America’s greatest troubadours for decades.

A: Abbey Road – The Beatles. The best at their best.

A: Bob and I have a backlog of songs, enough for two more albums right now. Stay tuned!

A: My bandmates, John Morand, and all the people that have given me tales of woe and misbegotten adventures that I have turned into stories.

A: Yes Jess, thank you for providing such a necessary service to independent musicians and bands, we all appreciate it!

<< Go to our full music review of:  Doin’ Nuthin by Rockford Road

<< Go to our full music review of:  Irish Grass by Rockford Road

Listen to DOIN’ NOTHIN and IRISH GRASS by ROCKFORD ROAD: