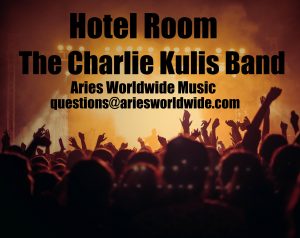 Remember that infectious, summery, country music hit Come and Getcha Some we told you about a few weeks back? Get excited –  The Charlie Kulis Band is back with another killer single. Hotel Room is the lighthearted, foot-stomping, good-time-having song you didn’t know you needed right now.

Inspired while waiting in a hotel lobby, frontman Charlie Kulis penned this song with band co-founder Rafe Van Hoy. The recording features Bob Stander (bass, guitars), Steve Holley (drums), Paul Errico (keys), and Charlie Kulis himself on vocals. The groups’ urban country/rock sound is a great fit for the message that a lot of us could use a little bit more of right about now – let’s keep this party going just a little bit longer.

The story being told in this track has a familiar sentiment – who hasn’t heard the bartender yell “last call” a little too early for your tastes once or twice? And like any good party animal, Kulis doesn’t want to let a great night die too soon – and thus enters this song’s catchy, singable hook: “Let’s take this party to my hotel room“. The whole track radiates exuberant, upbeat energy – with talks of sneaking past lobbies, jumping off balconies, and dancing until dawn – but it really drives that fun and carefree feeling home in the chorus, with lyrics that just emanate what a good time should sound like:

“The Band Is Almost Finished Packin’ Up
They’re Comin’ Over Just As Soon As They’re Done.
We’ll Dance Naked, We’ll Howl At The Moon,
Let’s Take This Party To My Hotel Room”

Keeping in line with their first single, the production on this track is particularly high-level. It’s a serious nod to the skills of the team at Parcheesi Studios in Huntington, NY where the track was recorded. The song has a vibrant, modern sound that really highlights Kulis’ vocals, accentuated even further by perfectly matched and blended harmonies. Top it off with the soulful and intricate guitar solo at 2:24 that leads right into a drum/vocal breakdown of the chorus, and you have every component you need for a rock-solid country radio hit.

If you’re a country music fan, The Charlie Kulis Band should be on your radar. This is quality, catchy, memorable contemporary country music that would fit effortlessly into playlists and radio stations alongside today’s top country stars. Hotel Room is everything you want in a modern country tune, and it has us excited to hear more from this clearly talented group on the rise.

BELOW:  Listen to Hotel Room and connect with their website and social media platforms. Please support The Charlie Kulis Band by visiting them online, and playing, downloading, and/or purchasing their music, or attending a live show! And, as always, thank you for supporting real music!

Listen to HOTEL ROOM by THE CHARLIE KULIS BAND: