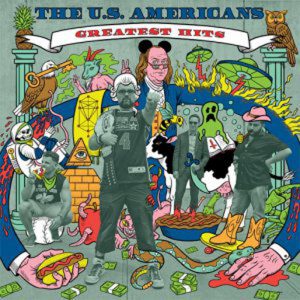 Their awards:  Eternal Champions of the USA as awarded by House of Glory

My friends and fellow music-heads, I offer you: The US Americans (TUSA).

Made up of: Jeff Weiss (vocals, guitar, percussion), Emerson Williams (drums), Daniel Deychakiwsky (bass, guitars), and Roy Abraham (guitars), this raucous modern-alt-punk foursome has one purpose:  Speak your mind—and rock whilst doing so.

Their debut album, the ironically titled, Greatest Hits, dismantles every single sociopathically convenient feature of modern, “civilized” life; and does so with skill (i.e., it kicks ass).

Kicking down the door with Playtime, the album opens with a wildly dynamic piece of modern-punk. The guitars scream, the drums are razor sharp though not overstated, and the vocals are edgy. And, I fu#@ing LOVE the use of the slide in the guitar riff—just fantastic.

One part punk-metal, one part funk, Money In America is both crazy-smart, and wildly sarcastic—all at once. Tempo dynamics, wah-pedals, and intelligent lyrics go a long way and it’s only track #2…

“Queens get the money. Kings get your nut…”

Innocent Foods is like a bottomless bowl of riffs.

Our Favorite Track…
The ambient tones in Movies juxtapose dynamically with heavy distortion and a dreamy electric solo at 4:03. It’s like Morning Parade meets Filter. 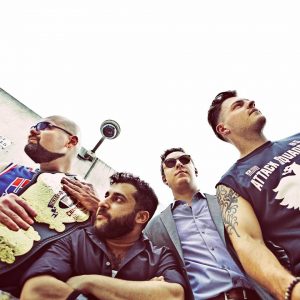 Lazy Suzy opens with 16 seconds of country/Americana rhythm, then quickly makes a 90-degree turn into a funk-infused piece of garage rock, which boasts yet another tempo change and ripping electric solo from 2:55 to 3:11. That 15 seconds of melody have no business being there…and it works brilliantly.

Don’t for one damn second think you know jack-s#*t about TUSA. Cuz, once you do, they toss Dentist Street your way. A few ambient  picked strings open the song for just over a minute. The song then—in what can now be “safely” labeled as true TUSA fashion—transitions flawlessly in and out of a jazz-bluesy composition worthy of any audience. It’s just damn interesting, damn entertaining, and I love that they ended the album this way….very, very cool.

In Conclusion…
Hands-down, no question, in all the reviews posted on The Ark of Music, The US American’s Greatest Hits officially takes the trophy for the most difficult to pick a favorite track. (I changed my selection 4 times.) Each track offers a plethora of unique melodies, tones, tempo changes, vocal dynamics, subject matter—all while simultaneously serving the greater-good of the album. One second I’m enjoying some slow bluesy riff, the next second I’m getting punked-out, and the next second I’m drifting along to an etheric-industrial melody, and it all happened over the course of the same song.

All of that diversity—while being wildly entertaining to me and you—in actuality speaks to the group’s ability to compose and perform complicated material. It’s just damn impressive both subjectively (art), and objectively (technique).

I cannot overstate how incredibly creative and unique this project is—as a whole. I haven’t gushed-on like this for some time. But the point is that TUSA’s Greatest Hits is in our top-five choices for The Ark of Music’s 2017 album of the year. There, I said it. Agree? Cool. Disagree? You better have your argument prepared, son. Cuz…damn.

BELOW:  Listen to The US Americans’ album, Greatest Hits, and connect with their website and social media platforms. Please support The US Americans by visiting them online, and playing, downloading, and/or purchasing their music. And, as always, thank you for supporting real music!

Listen to The US Americans’ album, Greatest Hits: