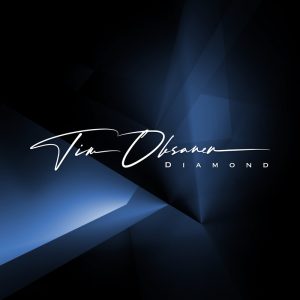 We last heard from Queensland-based pop artist Tim Oksanen back in March of this year with the release of his album Aeon, a project that we felt “seems to have a little bit of soul in every line.” Now, Oksanen is back this fall with another full-length album that is very much in the same vein. A doctor by trade, Oksanen discovered that his med student Ned Farley was an exceptional guitarist, and after a few jam sessions now joins Oksanen on many of these tracks. The album, titled Diamond, is a home-studio work primarily inspired by Oksanens’s wife and is an eight-track collection of truly heartfelt, evocative music with love at the center.

Once again we find the piano as the heart and soul of Oksanen’s work, and we’re reminded of this right away on the album opener Heart Was Like. This is a lighthearted, easygoing number that features a number of standout bass riffs and rich backing harmonies. From the start, the emotion in Oksanen’s voice is apparent – you can absolutely feel the authenticity in both his singing and in his lyrics.

There’s a sense of longing and tension in Waiting For You. This is a gentle ballad with Oksanen’s bell-tone vocals at the center, and the inclusion of the strings adds warmth and depth. The brief length of this track seems to add to the overall story being told on this album, where Oksanen chooses not to dwell on the time before he found love, and instead rushes headfirst towards it, quickly and readily. This is emphasized by One With Me appearing as the following track. This has a similar minor cadence and arrangement as Waiting For You, but the energy picks up and the story shifts to the electricity of falling in love. The palpable change is perhaps most present in the excellent lyric work here: 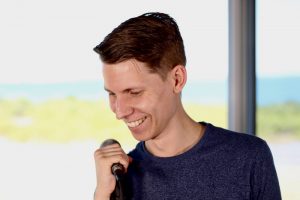 With You is a noteworthy inclusion on this album as one of just two instrumentals, and goes to show that Oksanen is as effective as painting pictures with sound as he is with words. This short piece is a tender, delicate dance of piano tones and nothing more, stunning in its simplicity. On the album, it seems to serve as the moment – the one where Oksanen’s journey with his wife really began.

Dream Team is also a standout track, flipping the script and looking at the relationship at hand from years down the road. It’s a more pensive approach, reflecting on past trials and tribulations and looking into the future together. The arrangement reflects this with a soft but insistent rhythm and hopeful melody.

It’s always a pleasure when Naomi Oksanen‘s vocals make their way into a song, but it’s especially poignant on an album where she is more or less the star. Hold Me Together gives us a taste of this as she provides the backing harmonies. The distinct symbolism of their two voices blending seamlessly on a track with this particular message is all but perfect in execution:

We’re also treated to a showing of skill from Farley on this one, as the intricate acoustic guitar work is the driving force of much of this track. Indeed, every musician on the album seems to be at the top of their game on this one.

When real emotion finds its way into music, the result is always nothing short of phenomenal, and Tim Oksanen has proved time and again that this is his bread and butter as a musician. The songs on Diamond are vivid, meaningful tapestries of feeling, detailing a love story for the ages in the insightful way that only a true artist can do. It’s impossible to listen through this album and not get caught up in the raw intensity of the journey, and that is what makes it so particularly exceptional.

BELOW:  Listen to Diamond and connect with his website and social media platforms. Please support Tim Oksanen by visiting him online, and playing, downloading, and/or purchasing his music, or attending a live show! And, as always, thank you for supporting real music!

(Want to have your music reviewed on The Ark of Music? Click HERE.

Listen to DIAMOND by TIM OKSANEN: