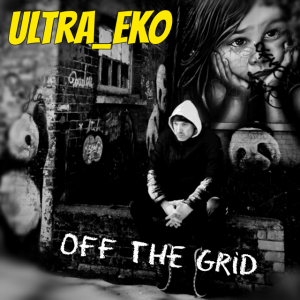 Here at The Ark, we aren’t strangers to the work of Ultra_eko. Earlier this year we had the distinct pleasure of reviewing his debut EP, Kitchen Sink Dramas, a project that we truly found to be “underground hip-hop gold“. Now Ultra_eko is back with a full-length album titled Off The Grid, where his innate melodic abilities and storytelling skill are back on effortless display.

“Looking over the whole album, there is not a single functioning relationship; as the narrator in ‘Eternal Sunshine’ says, ‘I feel so separate, as if there were a pane of glass between us. I write upon it, backwards, from right to left so you might read it right, but it seems the meaning of my words always getting lost’ – that line sums up a lot of the relationships in this work.”

Ultra_eko is still fairly new to the indie hip-hop scene, with his first tracks having been released in 2019. Based in South London, he’s been rapidly developing his own unique voice and style within the genre. Ultra_eko calls Off The Grid “more accessible and popular work” than his last EP, and while Kitchen Sink Dramas was unquestionably excellent, we’re inclined to agree. Ultra_eko’s style has only grown stronger and more defined since his last release – within this new record, he unleashes a slew of complex stories where the characters within them find themselves at odds with the technological advances that have seated themselves at the center of everyday life. 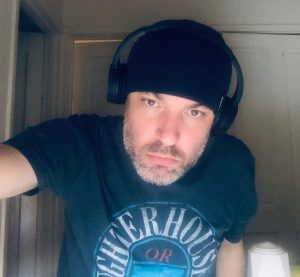 The entire thematic undercurrent for the album is set by the opening line of the opening track Viral – “You are locked in this machine, from the moment you are born until your dying day.” Indeed, this album is rife with the desperate and difficult stories of people who find technology at the root of their troubles. We praised Ultra_eko for the “original, relatable pain” that was at the foundation of his previous EP, and we can feel a continuation of that trend here from the very beginning. The idea that the digital world we live in has forced us into unnatural roles as cogs within the capitalist machine is a concept that so many relate to and resent, easily creating deeper understanding in the individual stories being told across this record.

Putting all of the brilliantly written and complex lyrical components aside, at its core this is excellently produced and performed hip-hop music. Yellow Redux might be our favorite example of this – this track has unbridled energy, with a flow that feels effortless over a punchy bass line and a vibrant horn section. It’s 70’s funk meets modern hip-hop, a combination that works far better in this track than one would ever expect.

WIFI Wifey is a heavier track with an overall feel that is fairly dark and ominous. This is rapid-fire rapping over a minimalistic beat; restraint in the production allows the story to be the main focus. Here the foreboding tones feed directly into that story – a husband’s infidelity is discovered online by his wife. Perfectly tying into the theme of damages being done by technology, each element of this track helps to tie it together into one cohesive composition – a regularly occurring feature in many of these tracks.

We also love Neon City for showing a more vulnerable and melodic side of Ultra_eko. The gentler instrumentation – keys and spacey synths alike – softens the edge that is ever-present on this record otherwise. Even the style in which the rap is delivered feels less aggressive, but this simply stands as a testament to his range as an artist. It isn’t easy to succeed in every facet of a genre, but with the inclusion of a track like this shows that Ultra_eko is more than capable of it.

Alexandre Cazes is written about the true story of the man by the same name – the operator of the darknet market AlphaBay. The website was shut down for being a major source of illegal goods and services, and Cazes was arrested in 2017. He was found dead in his prison cell in Thailand days later of a suspected suicide. This fascinating but morbid story is captured incredibly well by this track. The haunting strings and wailing synths that are found throughout feel just a bit unsettling – enough to keep any listener on the edge of their seat throughout the track. It’s a masterful showing of rap skill, production expertise, and real-world storytelling all at once, a seriously impressive feat.

Substantive hip-hop that captures stories in both illustrious lyrics and adroit production skills. Ultra_eko has shown that he is an artist to watch with this most recent release. Off The Grid is a record for modern hip-hop enthusiasts, lovers of expert storytelling, and devotees of counterculture. If you enjoyed Kitchen Sink Dramas, you’ll love Off The Grid, and we suspect you’ll be looking forward to much more material from Ultra_eko in the future just as we are.

BELOW:  Listen to Off The Grid and connect with his website and social media platforms. Please support Ultra_eko by visiting him online, and playing, downloading, and/or purchasing his music, or attending a live show! And, as always, thank you for supporting real music!

Listen to OFF THE GRID by ULTRA_EKO: